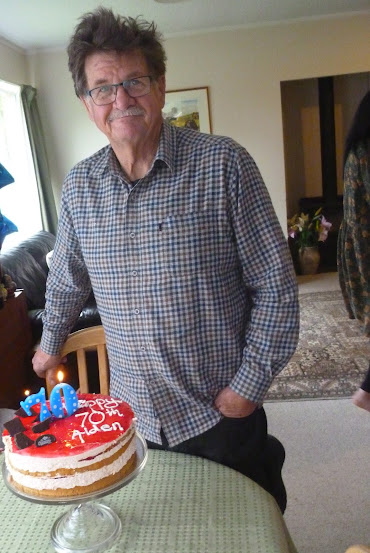 In 1968 Simon and Garfunkel released their 'Bookends' album. One of the songs on the album is a rather bleak little song about a couple of friends sitting like "bookends" on a park bench. The song is called 'Old Friends'. I disagree with the bleak portrait painted by the lyrics except for one line, which states  - "How terribly strange to be seventy". Yes indeed - I know, because yesterday I turned seventy. Bleak? "Rock on!" I say.

Congratulations Alden,
Looking great, going strong for the next decades.
This where I am heading for, August 19.

Thank you Ben. I remember taking all the younger age milestones in my stride - 40th, 50th and 60th - but I have found this 70th birthday somewhat different. One of the reason may be that 70 is the fulfillment of the biblical "Three score years and ten", with the words 'Fulfillment' subtly suggesting 'Completion'..... but I am not finished with this mortal coil by any stretch of the imagination .... as I have already stated, "Rock on", who knows what interesting experiences await.
I would be interested in you own reaction to this event on August 19th : >)

Thanks for your flattering remark Steve and you are correct "It's all an attitude of mind". Although lately I have been finding out just how deeply the mind is connected to the body. Sometimes the body just doesn't live up to what the mind wants the body to do giving a new 'age related' twist to the biblical saying regarding temptation i.e. "The spirit indeed is willing, but the flesh is weak.” I am finding that 'temptation' has its own subtle nuances. The spirit wants me to walk to the letterbox to get the morning newspaper, the weak old bones and flesh complain bitterly and I am tempted to leave the newspaper in the letterbox.

The way I cope with all the aches and pains at the moment is to pretty much simply ignore them, grimace and carry on, there's bugger all else I can do. I will power through the pain for as long as I can - life is too bloody good to give up at a mere whipper-snapper 70 years of age.

I am 73 this year and I still run and sail and race, but I can sense that the body is not as willing as it used to be. Then I look around and see that I am winning my age category in a running race, and although I am often the oldest sailor at RS Aero regattas, I am still beating younger folk.

Hi Tillerman, appreciate your comments. I am also beating some of the younger folk which shows that sailing can in most conditions be a bit of a "level playing field" as the saying goes.

Arthritis is my big problem at the moment - in my right knee and in my left ankle. This means that for me launching and hauling the boat back up the boat ramp is the hardest part of sailing. In light of this fact I have been looking at the RS Aero as a possibility which may very well extend the time I have left for sailing - because as you know an RS Aero weighs around 30kgs which compared to my Zephyr sailing dinghy at around 60 kgs makes the RS Aero half the weight and a very attractive option.

There is an RS Aero agent and seller here in New Zealand but to date the fleets are very small - but I am giving the Aero serious consideration.

Congratulations - haven't you heard 70 is the new 40 or something, maybe the new black or it it orange, why did I start writing here?

Seriously it's not to far off for me, as Steve says it's attitude plus good diet, exercise helps and make the most of every day.

Thanks Max, and a big Yes to attitude, diet, exercise and seizing every day - excellent advice (and a few new boats along the way as well : >)

Pleased to hear you are considering the RS Aero. The light weight certainly makes it much easier to handle on land, and contributes to its stellar performance on the water. As for there being relatively few Aeros in NZ so far, look on it as an opportunity to be the person who builds the fleet over there and makes it a thriving class in the country. Someone has to do it. It might as well be you.

These days I'm sailing a Topper, which makes me feel a lot younger than I am because I don't have to hike much.

Have you seen the Rocket sailboard? Made in Bristol Rhode Island, so probably hard to get in NZ. Hell, I can't get one in SF until next year. But the Rocket looks like a nice middle ground between Toppers and Aeros for us geezers.

Tillerman - Thanks for the encouragement, you talk a lot of sense. There are three main reasons why an RS Aero is firmly in my sights. The first (as already discussed) is the almost unbelievable light weight (30kgs is about the weight of an Optimist dinghy). The second is the phenomenal sailing performance and the third (within my context) is the cost. A new glass Zephyr is over five thousand dollars dearer than a new RS Aero, which makes the Aero lighter, much faster and cheaper.

My only concern would be if the physical sailing experience is anything like a Laser. I had a Laser for a season a couple of years ago and ended up really disliking the boat. I know some people love the Laser (and I respect that position) but I disliked the shallow hull, the difficult (for me) hiking position etc, etc. I am just not a fan of the Laser and would hope that the RS Aero (especially the hiking position) would be different.

So (Over 70s light bulb moment) before the sale - I shall take an RS Aero for a sail and hope I am not disappointed.

Thanks Dan - all us nineteen fifty oners are turning seventy (which stands to reason : > and it's great that most people I know in their 70s are engaged and active - A Rocket sailboard looks like a pretty active option!
I have never sailed a sail board but I have seen them at speed - pretty exciting stuff and a great test of ones seventy year old balance.

Happy BD Alden! You're catching up to me!

You pose an interesting strategy to deal with aging George, by declaring that others are catching up to you. I have done a lot of research into this and find that it is actually mathematically impossible for this to happen. What you are suggesting is a kind of immortality which defies the laws of physics, bugger - but full marks for trying : >)

Congratulations on your significant milestone, onwards and upwards. I arrive at that station in April next year!

Thanks Paul - milestone is a good word. Turning 70 is more in the mind than in the body, as you will find out next April!