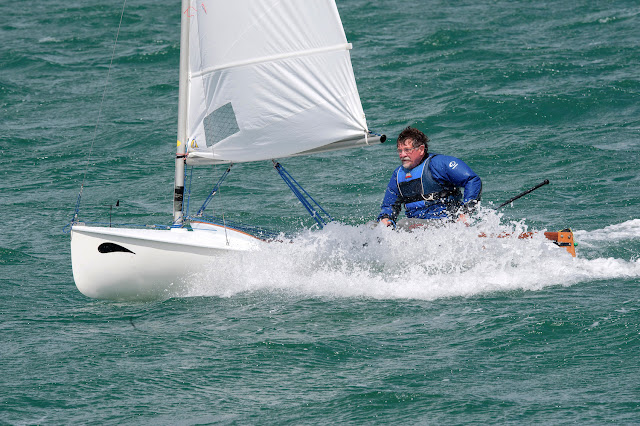 'Slipstream' and I were placed 60th out of 73 boats in the 2018 Zephyr Nationals. After less than two years experience in the Zephyr this placing wasn't really unexpected so I have to say it didn't dent my enjoyment of the event in the slightest. I had a truly wonderful time. It blew like hell ( 20 knots gusting to 28) for the first race (23 boats withdrew) and wasn't much better for the remaining 8 races.  I really struggled in the first few races in the high winds. I reached the top mark in these early races with the cockpit half full of water having been unable to control the heel of the boat when the big squalls drove through.
.
You Tube video - 2018 Zephyr Nationals 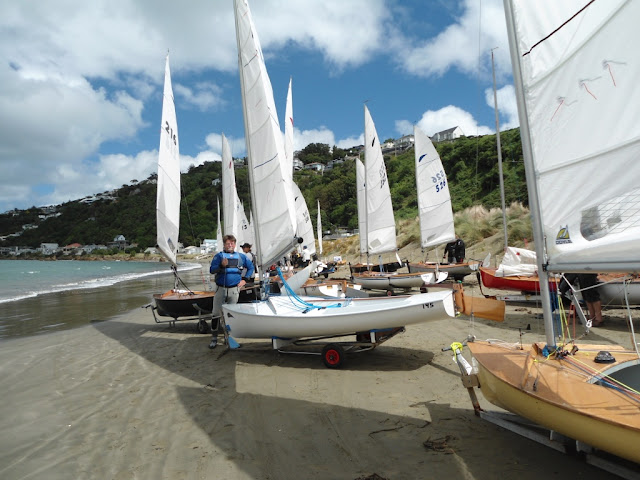 All kitted up and ready to go. Launching off the beach had its moments with small waves creating a bit of chaos at times. One boat got away from its skipper and rammed me in the side - my ribs are still recovering. 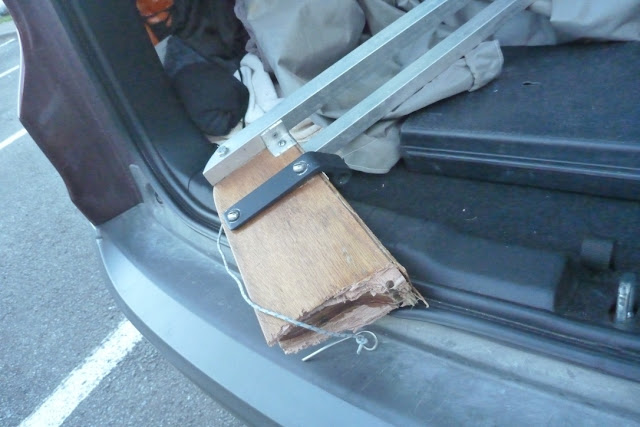 My mate Bernie never made it to the first race. He sheared off his Zephyrs rudder stock on the way to the start. 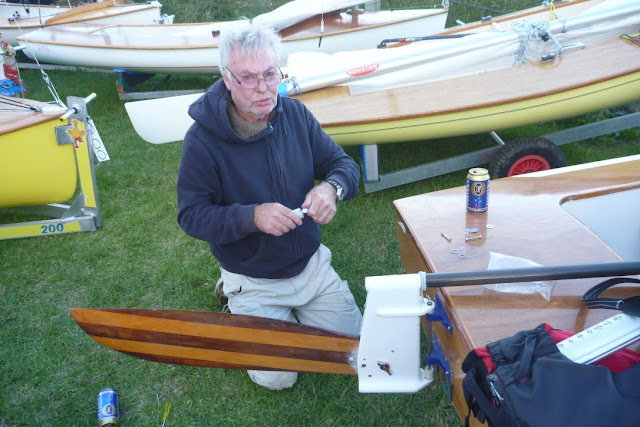 Bernie managed to purchase a new rudder stock and we spent a couple of hours drilling and bolting on a new set of rudder gudgeons to the stern of his boat. He raced the next two races but unfortunately strained his back so severely he had to retire from the contest. 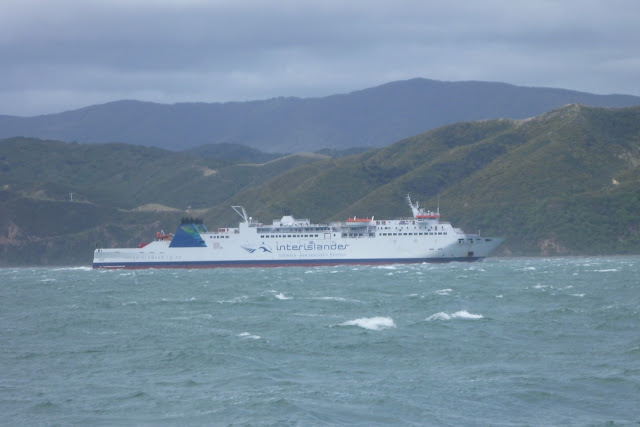 The Cook Strait ferry was a constant background presence throughout the sailing on windy Wellington Harbour. 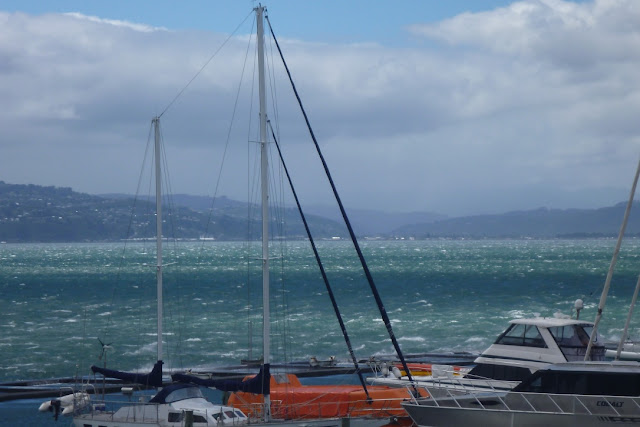 Happily we didn't race on the official last day (Sun Feb 24th) of the contest because the predicted weather prevailed and it blew a steady 35 knots - gusting to 45 knots all day. An extra race was held on both Friday and Saturday in light of the predication of high winds for Sunday.

Secretly I actually wished we could have sailed - the downwind runs would have been spectacular. I took this photo (above) on the wharf on the seaward side of Te Papa Museum. I also took this photo (below) which is a good symbol of Wellingtons legendary weather. 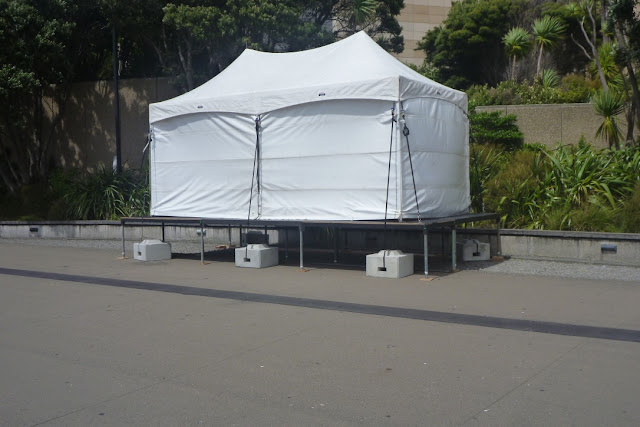 All construction site scaffolding and various tents on the wharf were held down with arrays of concrete blocks. 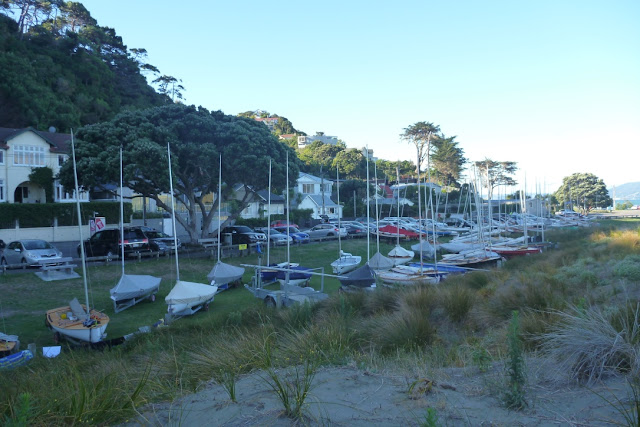 Christine and I stayed at the 'Beachfront Wellington Bed and Breakfast' (Extreme left in the photo). This was a beautiful spot across the road from the yacht club, the rigging area and the beach. We went to sleep each night and woke in the morning to the sound of the surf breaking. 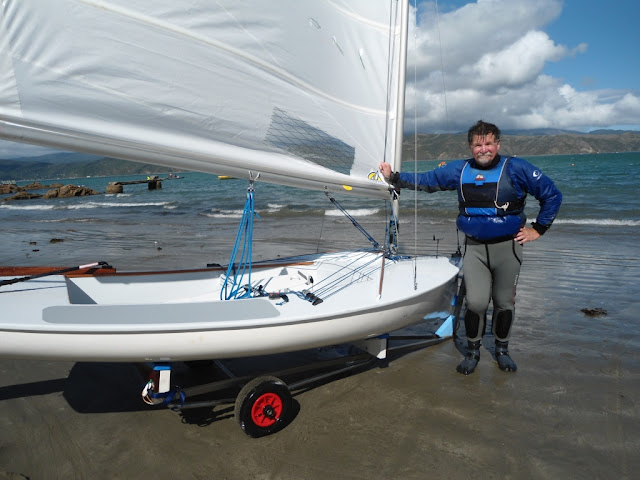 After the 3rd race I had a talk to Andy Knowles a former Olympic sailer and very experienced Zephyr sailor about my struggles going to windward in the tough conditions. He gave me some excellent technical advice regarding raking the mast, sailing with the centre board raked and raised about 120 -300mms and freeing the mains'l leech by putting on as much boom vang as I could. This worked well, I was able to keep the boat upright and water free and my placings improved somewhat. 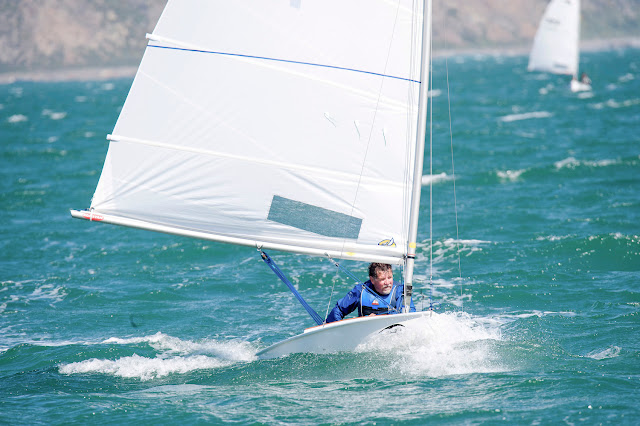 The lesson I learned from the contest was that the Zephyr is a very technical boat to sail fast and that I have only scratched the surface of what the boat is capable of doing. Of course I also need to improve my basic small boat racing skills - getting clear wind right from the gun in a big fleet will be a start. 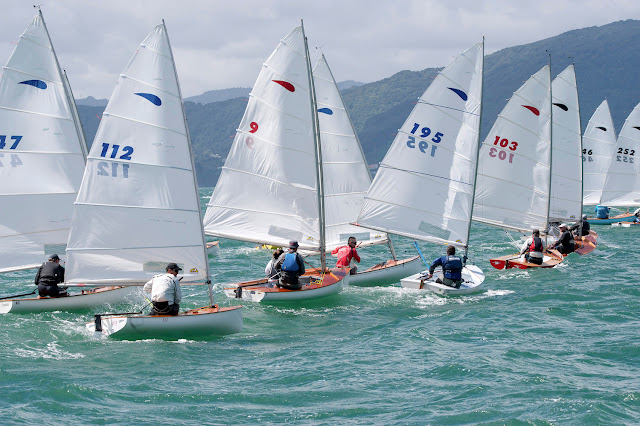 The positives I took from the whole experience were:
- Completing all 9 races.
- Not capsizing.
- Learning how to sail better to windward in high winds.
- Stonking along with the boat balanced on a knife edge as she planed like hell in a ferocious following wind.
- Enjoying the company of wife Christine and Lynn and Bernie our traveling companions.
- Meeting some old friends and new friends.
- Being amazed by the skill and fortitude of Zephyr sailors (Over 40 of the skippers were aged 60 or more - with one over 70).
- Enjoying great breakfasts every morning cooked by Craig the B'n'B owner (I told him I am going to nominate him for TVs Master Chef).
- Racing in a really big fleet
- Watching 73 beautiful, beautiful Zephyrs sailing.
- Experiencing a really well run contest; well done Worser Bay Yacht Club!
- Going to sleep and waking to the sound of surf breaking.
The 2019 Zephyr Nationals will be held in Tauranga - I will be there. 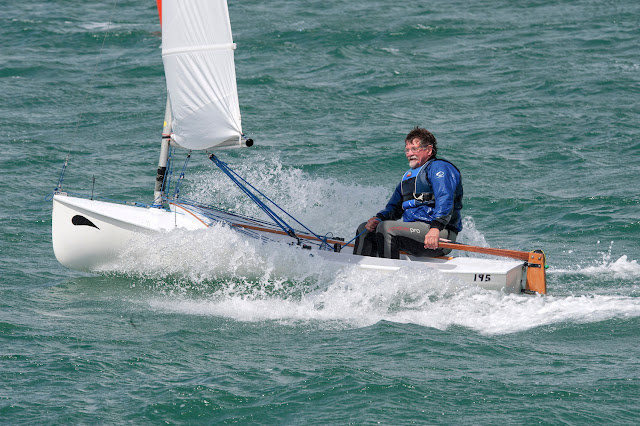 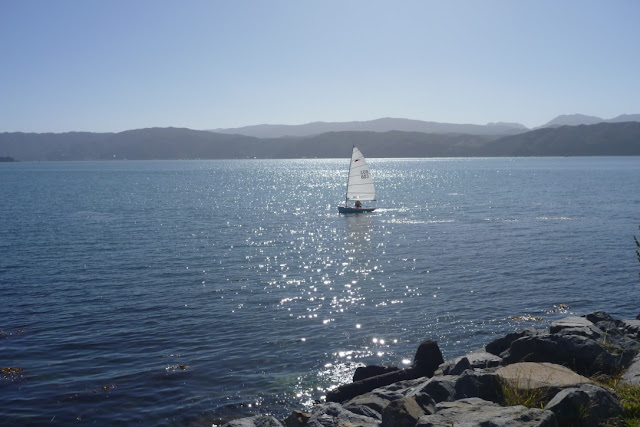 If the weather gods are kind to us we will be soon be sailing on Worser Bay in Wellington in the 2018 National Zephyr Championships.  My fellow Zephyr skipper Bernie and his partner Lyn started their journey down to Wellington today; Christine and I start our trek south tomorrow. The weather for the Wellington region doesn't look good at all - severe gales forecast for the next few days. I hope things have settled down by Thursday when the sailing begins. Yesterday I went for a practise sail on Parua Bay to make sure all the alterations and recent tweakings of things nautical on 'Slipstream' were all working well before heading south into combat. With Cyclone Gita influencing the weather over the coming week that combat may well become a war of attrition - watch this space. 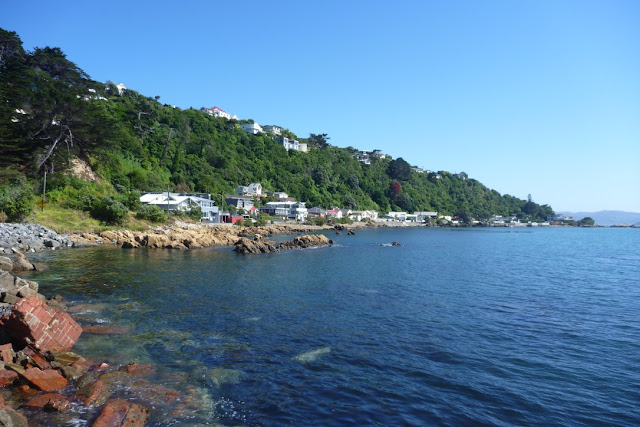 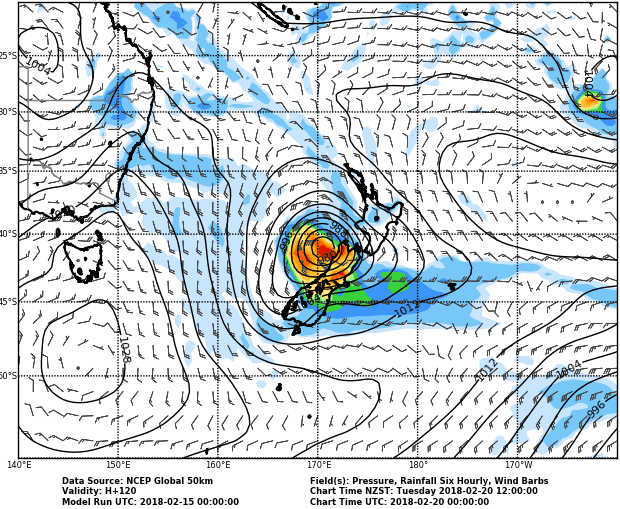 Shipmates, without wanting to get too obsessive about all this cyclone malarkey the above weather map is one of the predictions of the cyclones position in 5 days time. At the present moment it is about 1000km or more north between Fiji and New Caledonia.

Tuesday 20th February shows the Cyclones closest predicted approach with the north eastern quadrant of the storm raging over Wellington.

Tuesday the 20th is the day we arrive in Wellington.

Wednesday the 21st is boat inspection and measurement day.

Thursday the 22nd is the major race briefing day with the first race at 1400hrs.

............ so my guess is that if the above weather map projection is accurate the worst of the storm will have continued its southward direction and moved away from gladiatorial Zephyr Colosseum of Worser Bay ........... butt (and I use that word advisably) there is going to be plenty of wind, so when my butt is stacking out over the the gunwales I hope my weight of 90+kgs will come into play and help me to fly to windward like a Zephyr with a 90+kg canting keel. (hope springs eternal).
Posted by Alden Smith on Thursday, February 15, 2018 2 comments: 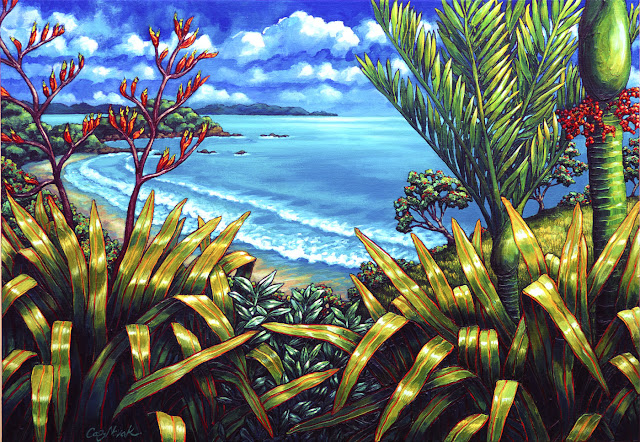 Shipmates; here in Northland (above) we are watching with interest the track of Cyclone Gita which is bumbling around just below the equator at the present time and is predicted to hit New Zealand sometime next week. This is interesting and somewhat disturbing as I (and to date 70 other contest registered Zephyr sailors) will be lining up on Wellington harbour for the 2018 Zephyr nationals as this great lumbering Category 5 cyclone strikes - yikes!!


https://earth.nullschool.net/jp/#current/wind/surface/level/orthographic=127.95,12.17,216
(Click on the link, then click/hold/rotate/enlarge the globe to take a look)