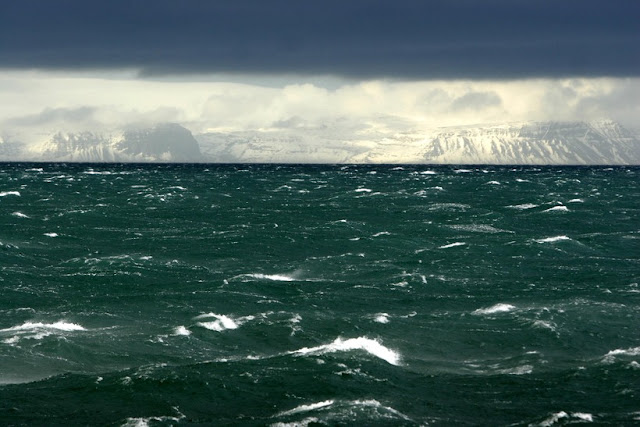 Nah.... This is actually Iceland; which is how it feels here in Whangarei at the moment ........ Iceland.

If you watch and listen to the daily news you could convince yourself that the world has gone completely stark raving mad. But happily among the mayhem and madness most of the world continues to live productive and positive lives; working, creating and generally enjoying themselves as they live out their own truth and make the most of the context they live in.

I came across this video and thought it expresses something of that continuity.
I like the name of this lovely little ship.


I am jumping ahead here a little on my Southern Sojourn story. I was prompted to do this post by a news item on last nights TV One News. This is  24 / 7 'Live Cam' coverage of a Royal Albatross chick (and from time to time its parents) on Tiaroa Head at the entrance to Dunedin Harbour. To date it is not known whether it is a boy or a girl Albatross.

What you are seeing in the live cam shots is the harbour stretching inland in a south westerly direction towards Dunedin city in the distance. If you turned the 'Live Cam' 180 degrees in the opposite direction you would be looking eastwards to the seaward side of the headland and the Pacific Ocean.

I was in Dunedin 5 weeks ago and shot this photograph (below) of Tiaroa Headland from the seaward side. The Albatross chick is sited to the left of Tiaroa Head Lighthouse. 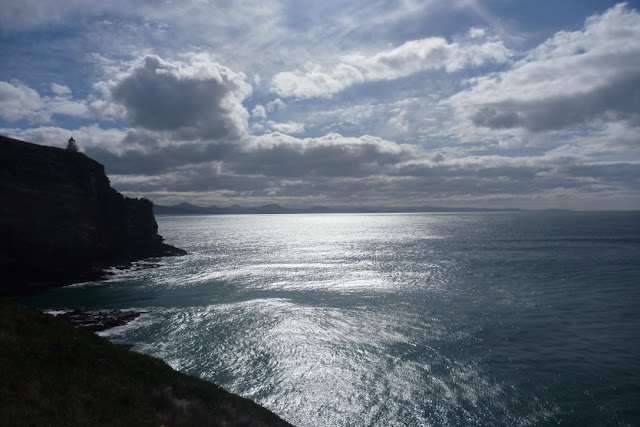 If you would like to officially name this Royal Albatross you can enter a competition to do so here: http://www.doc.govt.nz/namethechick If you win you get to fly to Dunedin to see the growing chick.

If you enter the competition remember you can't name the big bird ' (Sir / Dame) Alby Fleetwing Pelagic' as I have entered this name myself:

Sir / Dame ? - Alby is of course a 'Royal' Albatross - having a Knighthood and a Royal Warrant from her majesty to fly in the Southern Ocean as a Royal Albatross.... but Alby is definitely not a member of the Royal family.

Alby? - Short for Albatross (You knew that of course).

Fleetwing? - Two reasons. 1 - An Albatross is very fleet of wing i.e fast and nimble when flying. 2 - The word 'Fleet' makes a passing reference to the wonderful music of the band Fleetwood Mac and their great guitar work 'Albatross'.

Pelagic? - An Albatross is a 'Pelagic' bird. Apart from times of breeding and raising chicks, it lives and has its being in the open sea. 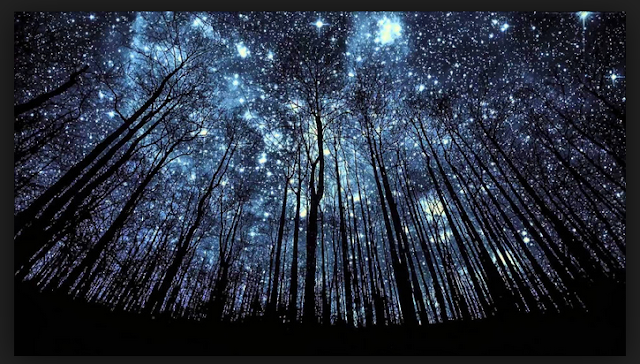 Bill Richardson's Transport World is an interesting visit if you are in the deep south of Southland New Zealand. Apparently this transport museum is the largest private collection of it's type in the world. It is a privately owned collection of over 300 trucks and 150 petrol bowsers, a significant Henry Ford car, a V8 collection, VW Kombis, Pedal Cars, Wearable Arts and much more displayed under cover in over 10,000sqm of sheds. 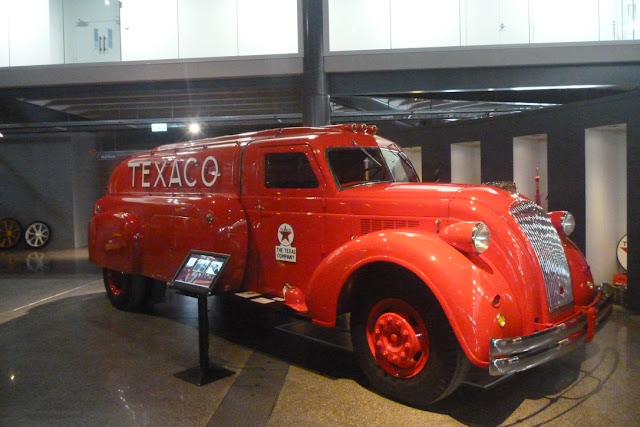 I thought with a few modifications that this old North American petrol tanker would make quite a nice campervan. 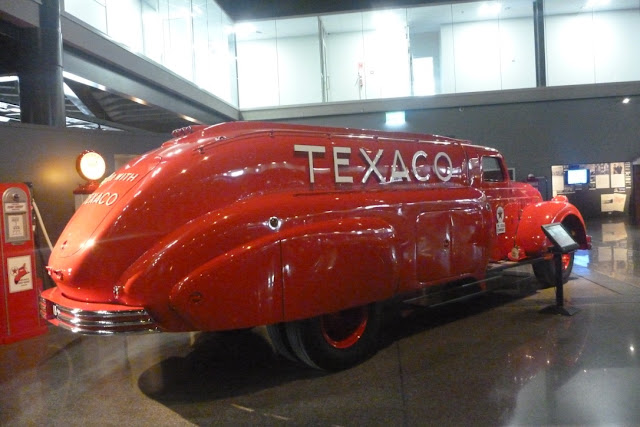 Another option would be to fill it up with petrol and see how far you could drive it before you needed to refill it. 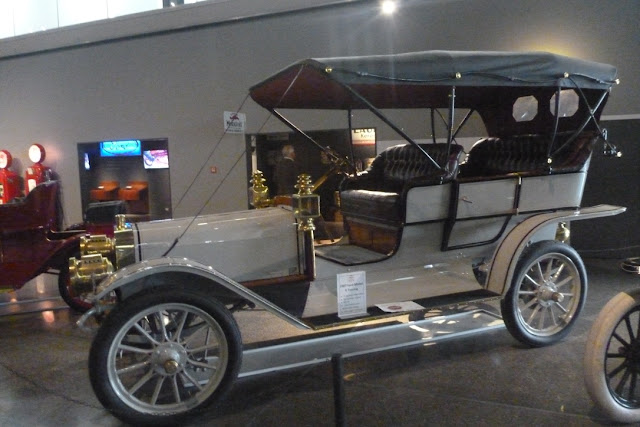 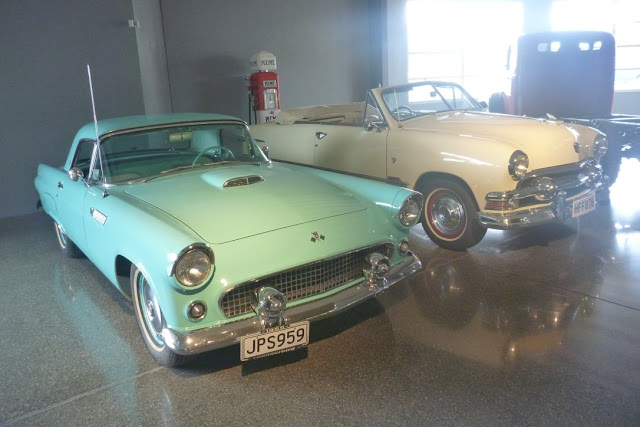 1950s Ford Thunderbird (Left and a similar vintage Plymouth (Or is it a Chrysler?). 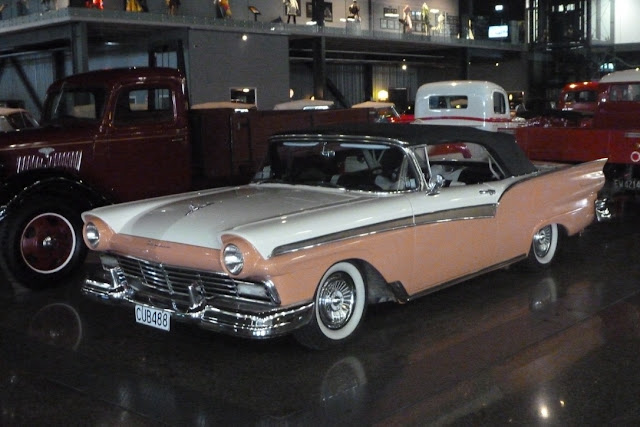 This is either a Cadillac, a Studebaker, an Impala or a Ford Fairlane. I am sure someone out there knows. 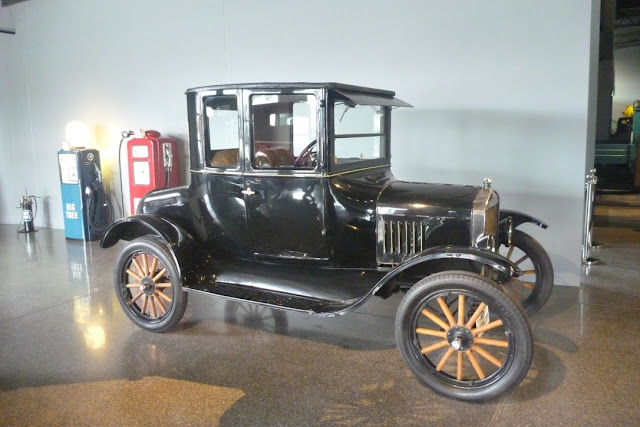 One of Mr Henry Ford's cars that started it all. 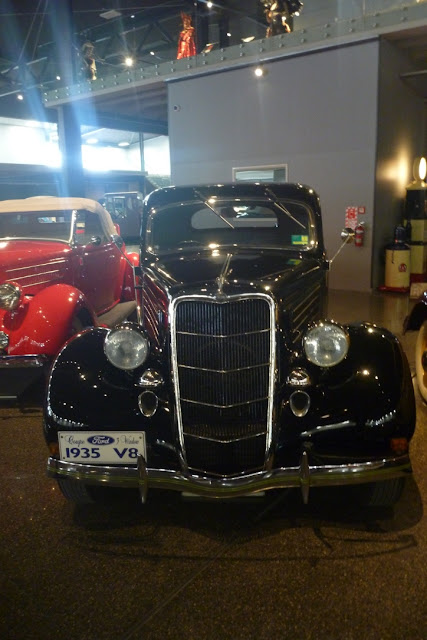 My Standard 6 teacher Bill Liddy drove a grey coloured V8 Coupe just like this. He wasn't very impressed in 1964 when we used a couple of pieces of cardboard and some crayons and fitted a set of "L" plates to his car. Mr Liddy who was a great and influential teacher of mine drove a long wheel based truck version of this car in North Africa during WW2 during his time with the Long Range Desert Group. 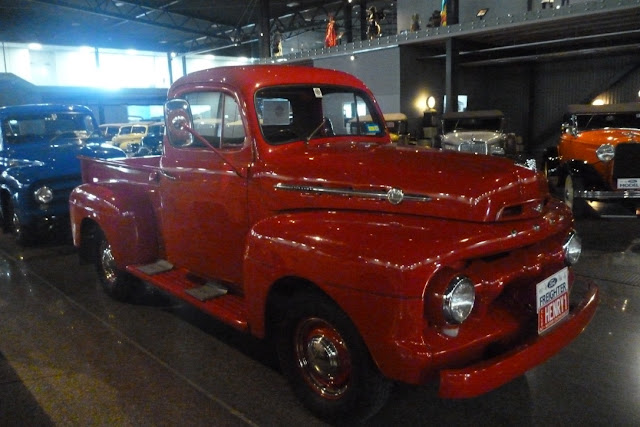 They don't make them like they used to. This is what I call a real Ute. 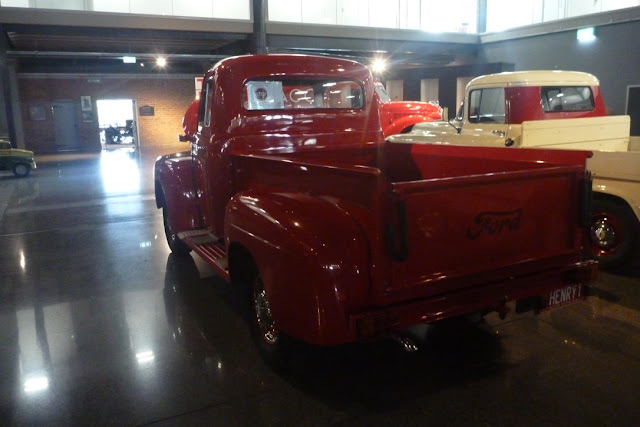 I could put a sailing dinghy and a whole lot of other kit besides on one of these. 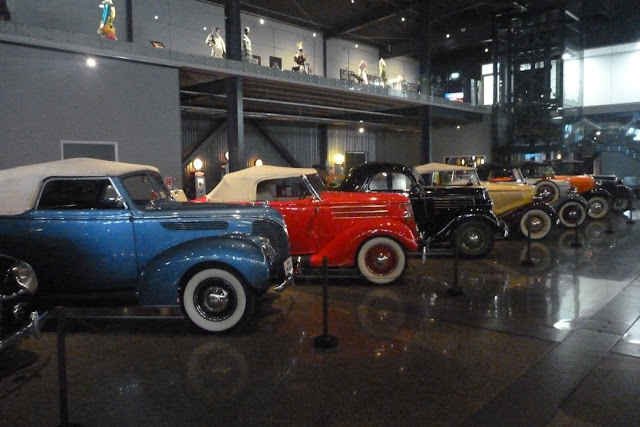 A Bevy of V8 coupes to choose from and so shiny I almost had to put on my sunglasses. 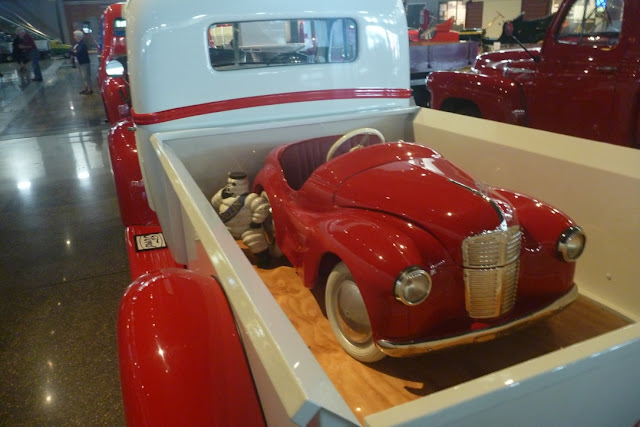 A very red pedal car from a large collection that was on display. 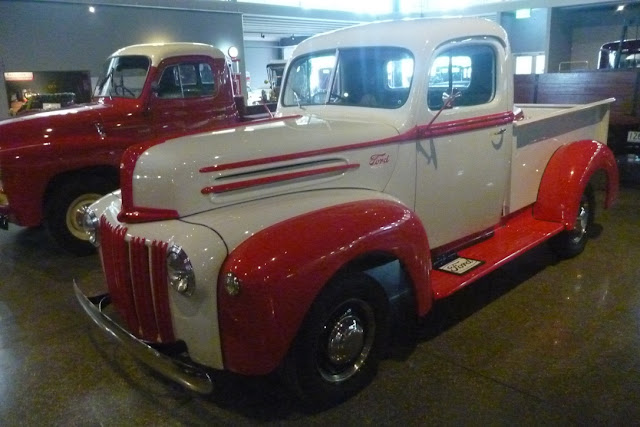 Another excellent example of a 1950s Ford Ute. 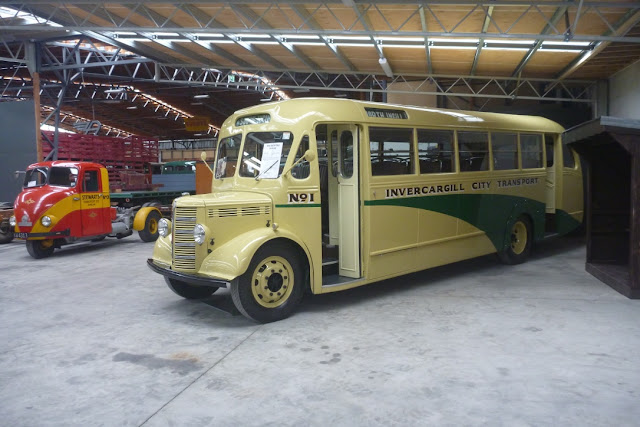 In the 1940s there would have been fleets of these buses serving various towns and cities in NZ. 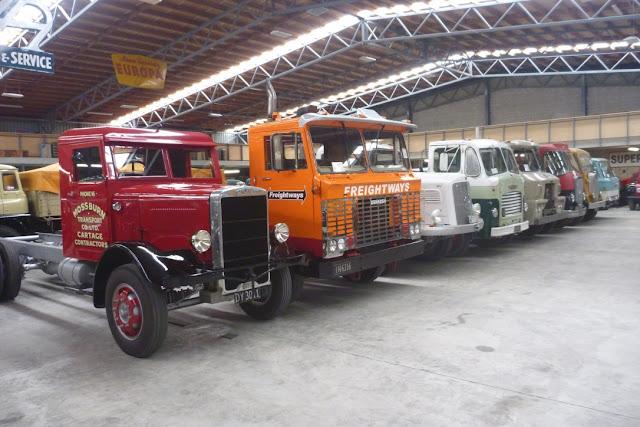 The red truck on the left completed its working life in Mossburn in Southland. 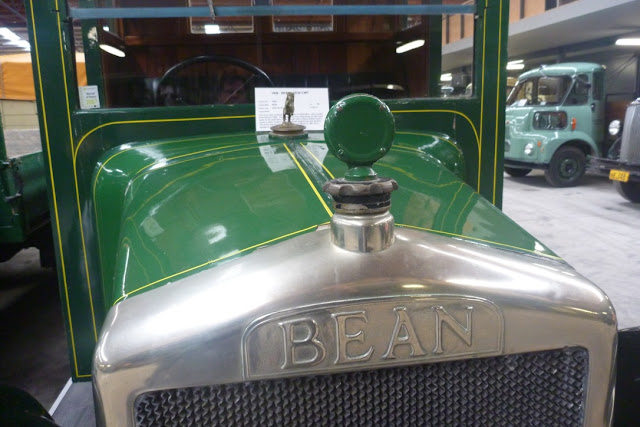 Yes, I am tempted to make a silly remark. 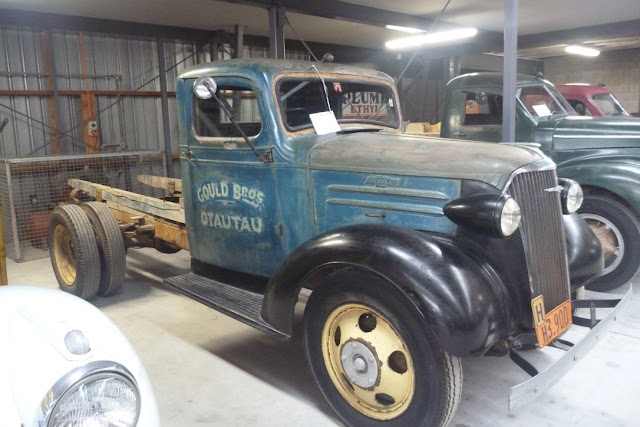 Otautau is a small town in Southland. 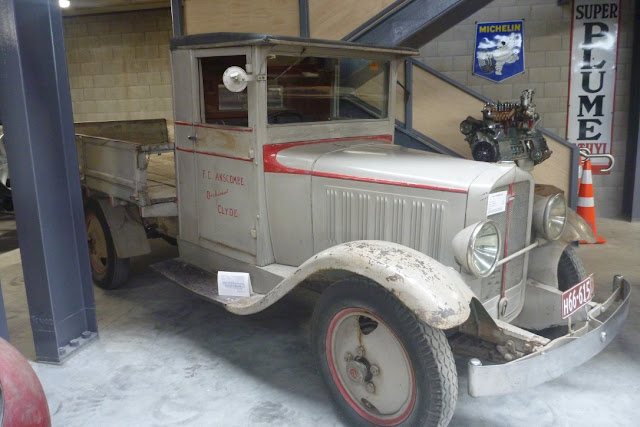 An old timer from the town of Clyde. I am old enough to remember the brown number plates. 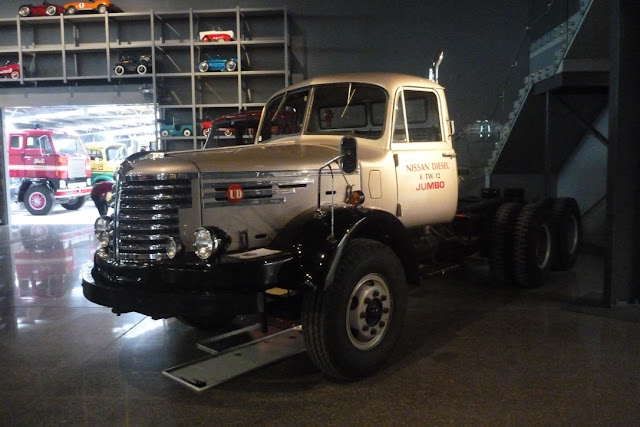 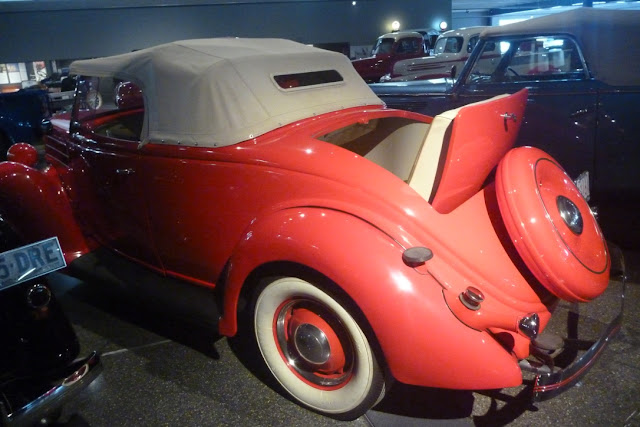 A rumble seat (American English), dicky seat, dickie seat or dickey seat (British English), also called a mother - in - law seat, is an unholstered exterior seat which folds into the rear deck of a two seat pre - World War 11 automobile, and seats one or two passengers. When unoccupied, the space under the seat's lid could be used for storing luggage.......... 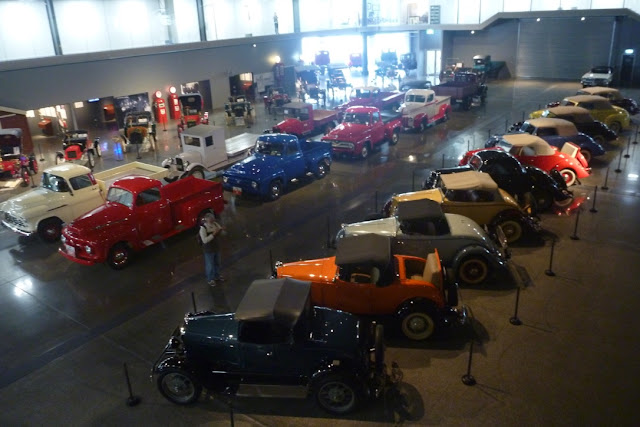 If you are in Invercargill Southland, New Zealand then this Museum is worth a visit.