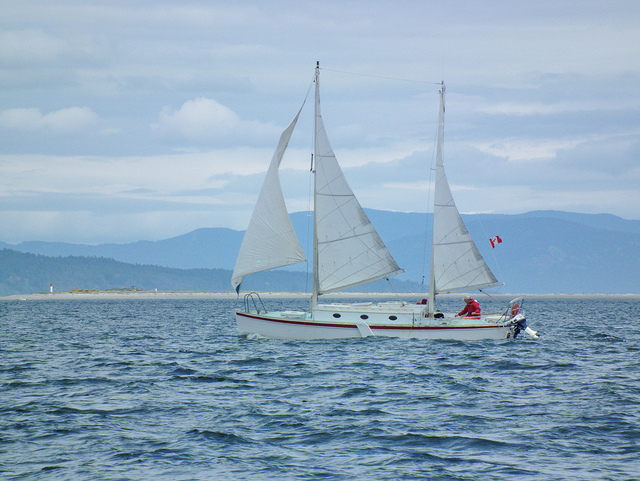 "It was a Sunday morning and Goddard gave thanks that there were still places where one could worship in temples not made by human hands." -- L. Francis  Herreshoff  (The Complete Cruiser)

Posted by Alden Smith on Saturday, December 30, 2017 No comments: 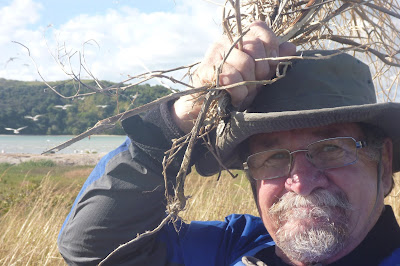 Yes, yes, yes shipmates, I know what you are thinking - "What's the silly old bugger doing now? " Well, hold that thought and I shall explain.

I decided to launch my new cruising dinghy 'Scout' and take a look at how the Pohutakawa trees that I am keeping an eye on for my conservationist friend Gerry are faring. Since I last took a look there has been a number of king tides which can wash across the little island and some pretty vicious winter storms. 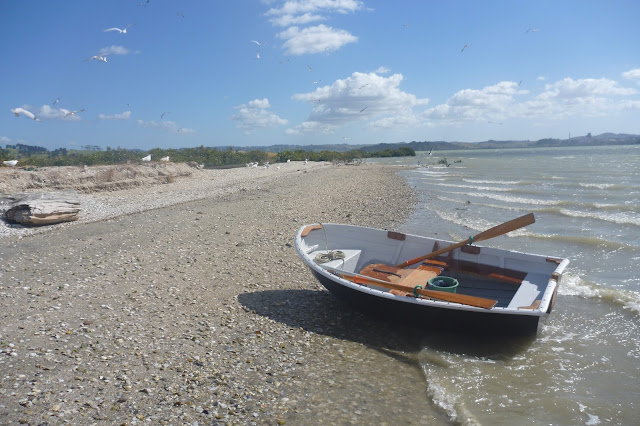 As I haven't yet constructed a sailing rig for 'Scout' it was a long row against an outgoing tide and a 15 - 20 knot wind to the now familiar island beach on Whangarei harbour. As I approached I could see a small breeding colony of birds on the grass berm just above the high tide mark. 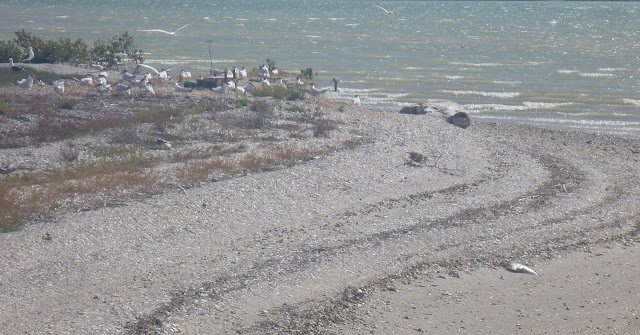 As I got nearer, the birds became very agitated and began to dive bomb me. I got out of the dinghy and walked as far away down the beach from the nesting site as I could, then headed inland to inspect the Pohutakawa trees.  A squadron of birds followed my every move, so as soon as I reached some vegetation I pulled a clump of old dead growth out of the ground and used it as protection for my head as the dive bombing continued.

Any idea I had that perhaps the birds might mistake the vegetation above my head for the plumage of a miraculously surviving Dodo or a geographically challenged Emperor Penguin were quickly extinguished as the aerial onslaught continued. These protective little seabird dive bombers weren't going to be fooled for a second by the great waddling Alden pretend bird as he crashed through the undergrowth. 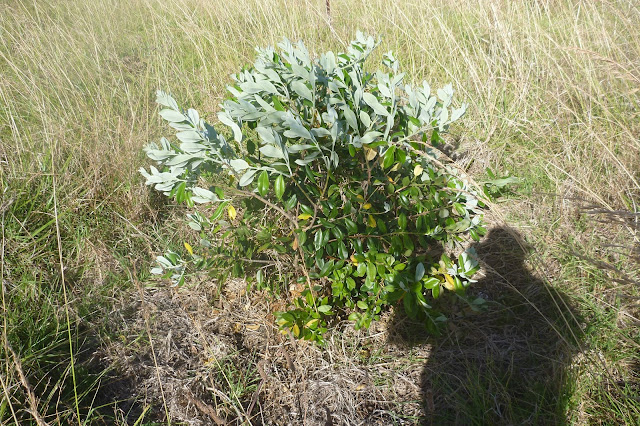 Of the 17 trees that were planted 8 are thriving and looking very healthy indeed. Two trees are dead and the rest have simply vanished. I wonder if they haven't been pulled out of the ground and stolen. 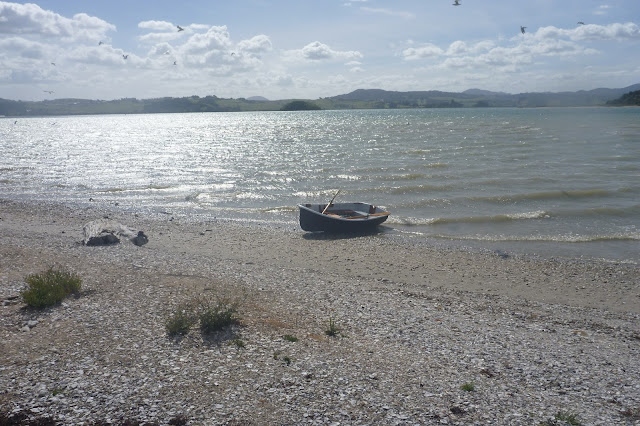 I spent a bit of time pulling weeds away from around the remaining trees and then returned to 'Scout' and headed home. It was an easy return to the launching ramp at the Onerahi Yacht Club as the wind and tide were now favourable and we were pushed along at a fast clip. 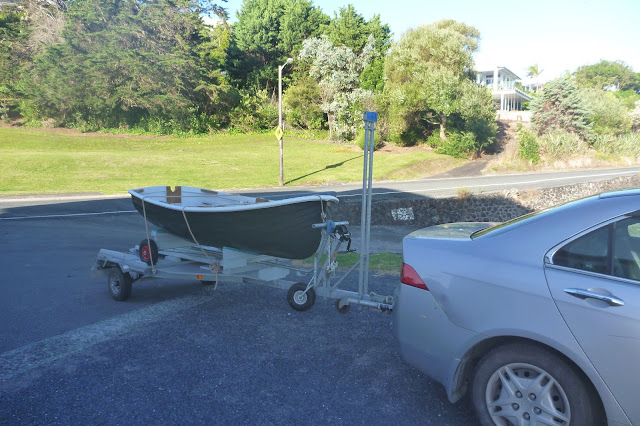 I am very happy with the way 'Scout' performs. She rows well and although a heavy dinghy I found this an advantage in the rough water and fresh head wind as the heft of her weight helps her to push solidly through head seas. I can't wait to get a rig on her and see how she sails! 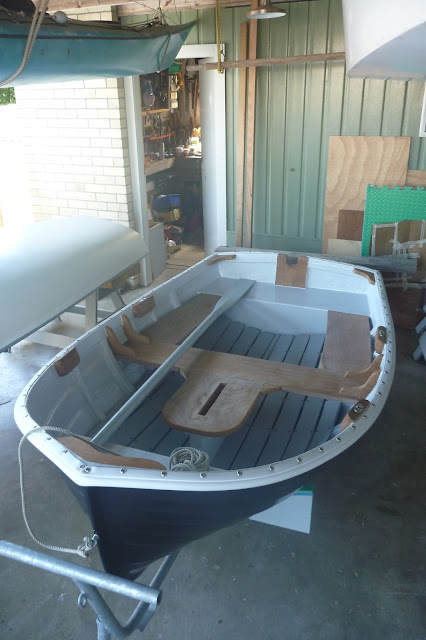 I must admit I am not much good at painting. Goodness knows why as I have done more than my allotted painting tasks. The first brushed on finishing coat was full of runs and the second coat with a roller was full of lint and fluff from the fast disintegrating roller - sigh. In the end I have managed to save the day with a light sanding, a cut and polish and a buff up with turtle wax. The result is a satisfactory smooth, muted, matte finish which you don't have to wear sun glasses to look at.

Leaning on the wall by the stern of the dinghy are a couple of lengths of Tasmanian Oak. I will use this timber to make a mast, boom and gaff for the dinghy. I will be looking at a sail area of around 65 - 70 square feet which should be enough to push the little packet along nicely. 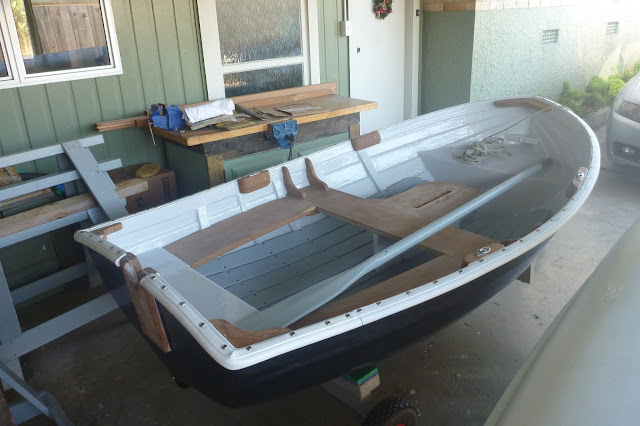 The dinghy is sitting on a new beach trailer that I purchased from Reid Trailers in Auckland. It took a few days to make and fit the cross pieces to the boats shape and glue on the cushioning foam but this job is now complete. The wheel span of the beach trolley is exactly the same as my Zephyr yachts beach trolley, so the whole outfit fits snugly on the road trailer without having to make any complicated alterations. The last big job on the dinghy was to fit the rubbing strake; its stark white colour contrasts boldly with the newly painted black hull.

Yesterday I thought about a name, and instantly the word 'Scout' popped into my mind - I like that name and I have made a nice little wooden name plate to carve this name onto. I can see in my minds eye 'Scout' and I working our way up little channels and scouting out where to sail to next.

So with only spars, sail, rudder, tiller and dagger board to be constructed - we shall soon be sailing. 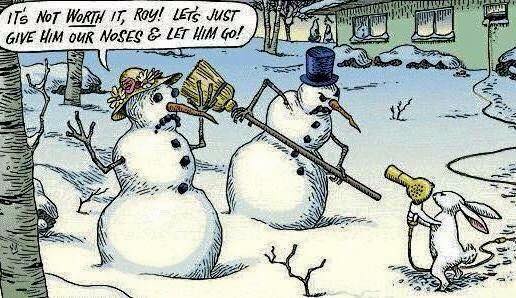 Huge social unrest in the United Kingdom. Mad March Hares in November? Some would blame global warming; but it's snowing! The world is getting very complicated.
Posted by Alden Smith on Friday, December 15, 2017 No comments: 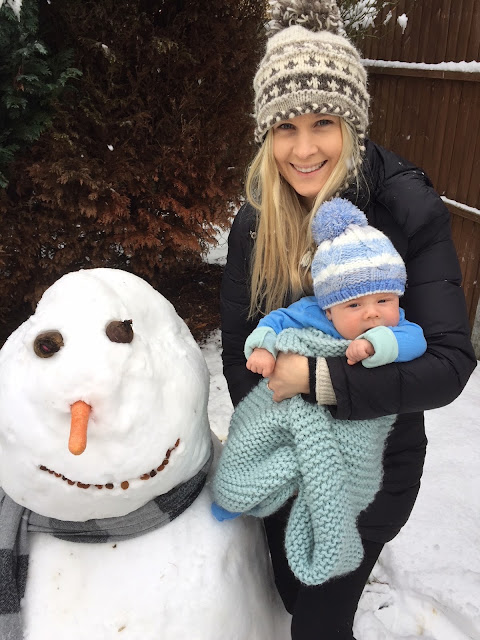 Charlotte: " Don't believe anything Nathan says, this is a sculpture of HIM. "
Salem: "Thanks grandad for knitting me this nice warm blanket." [ You're more than welcome little fella. ] " Do you like the sculpture of my daddy? [ Yes I do Salem, it's a remarkable likeness ].
Snowman: "Hey guys where's MY hat? I'm freeeeeezing! " 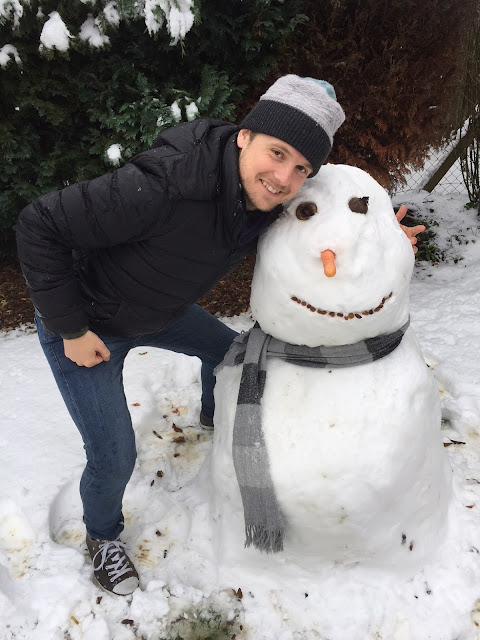 Nathan: "Now Alden, we used a photo of you as a guide and think we have sculpted a reasonable likeness, what do you think? " [ What do I think? 'Cogito ergo sum' is what I think my young philosopher, or should that be: ' Cogito ergo sum frigore conficiatur? ]

Posted by Alden Smith on Thursday, December 14, 2017 No comments: 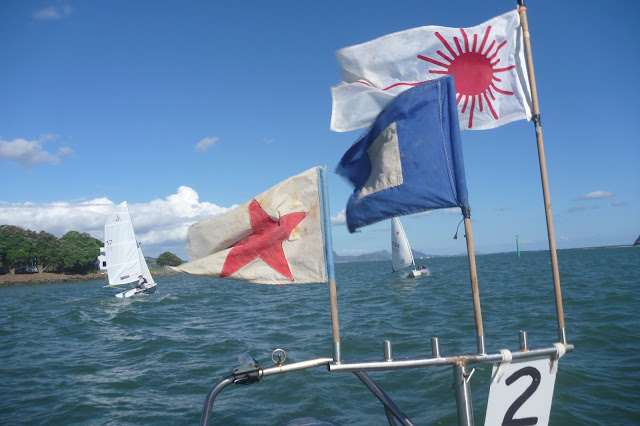 This evening I completed the second week in a row of duty on the Onerahi Yacht Clubs start / finish boat. It is a busy and interesting time setting out the course with buoys and setting up the start / finish line with as little bias as possible. 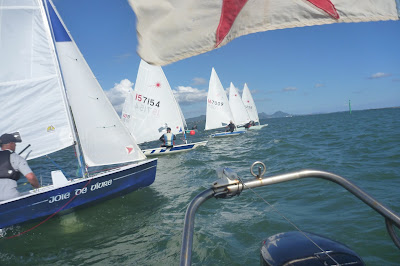 A 'Slow' and a 'Fast' fleet race three or four, back to back races on separate courses. The number of laps depends on the wind strength.

The start / finish boat (A large RIB with a powerful outboard motor) is always crewed by two people. It involves a lot of work launching,  setting out courses, race starting, taking each boats time, retrieving buoys, hauling out and washing down the RIB. I think it is a good system the club runs whereby each sailor gets to do a couple or more 'Start' boat duties. It enables you to understand the amount of work involved 'behind the scenes' and not to take all the race organisation for granted.

The other great benefit is just to be on the water on a warm evening watching small boats sailing. For some of us (apart from actually sailing your own boat) it doesn't get a lot better than that. 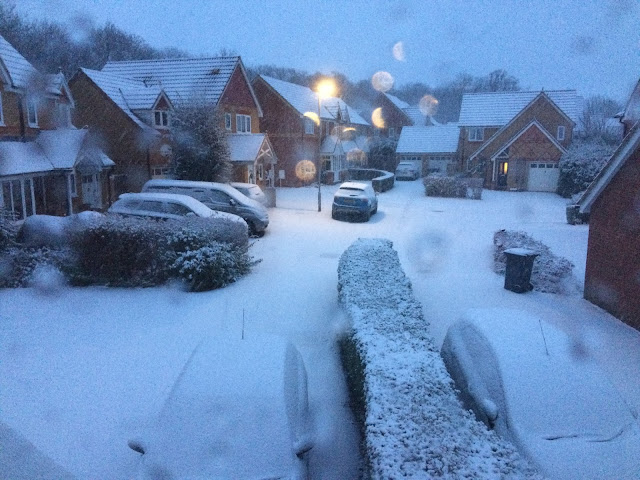 Our daughter sent us this photograph today from Cambridge England. This view is so familiar to us (minus the snow) as we looked out every morning onto it during our recent two month sojourn there. Now it looks like the UK may be in for a white Christmas. Whatever the weather, one thing I know is that England has central heating and double glazing sussed! Any sortie outside to make snowballs and snowmen will be greeted on return with ample warmth and good cheer.

For some reason this photograph reminded me of a story written by the late Maurice Griffiths, yacht designer and long time editor of the UK magazine 'Yachting Monthly'. He had harboured for a number of years an ambition to spend Christmas day on board his small cruising yacht, which he did; in conditions not dissimilar to the above photograph. I must dig out the story - I can't remember whether or not he rowed out to his boat or simply walked across the ice - yikes!! 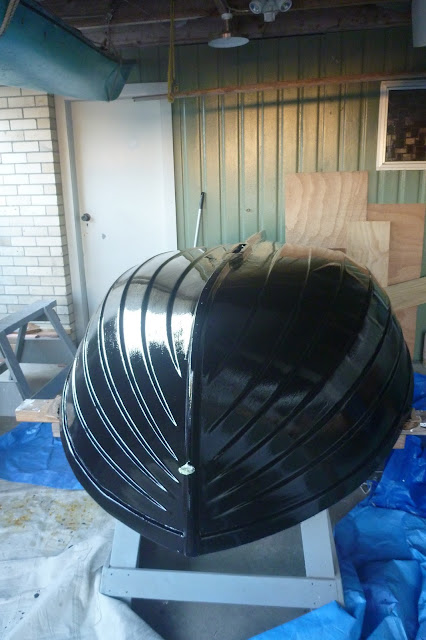 Today I painted my little cruising dinghy its new colour: 'Pirate Black'; a most appropriate colour. This coat is the first of two. It is 'two pot' paint (i.e. epoxy paint and hardener) and I painted it on with a high quality bristle brush. Despite this brushing strategy I have ended up with a few runs in the paint (I blame gravity). So instead of painting 'wet on wet' (within the three day cure time), I am going to let this coat go off until it is fully cured, then sand and apply the second coat with a roller. I am not after a perfect finish but I don't like runs in the paint. 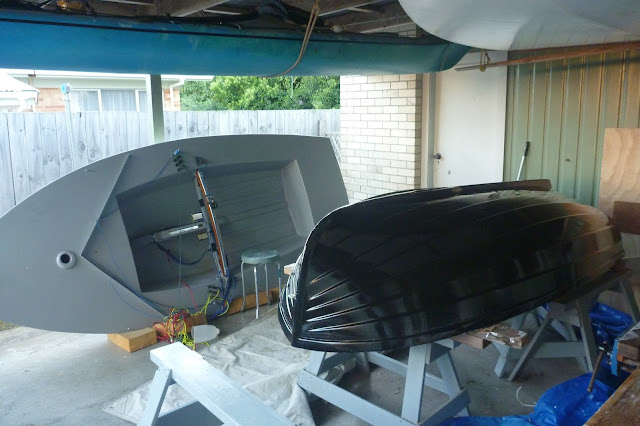 The other job that occupied my time was drilling and fitting the new self bailers to 'Slipstream'. To get good access to both sides of the hull I had to lean the boat on her side vertically. All that is required now is a couple of coats of 'Everdure' preservative around the oblong holes in the bottom of the boat and I will fit the new venturi self bailers. I will then be able to join the Tuesday night racing series - something I have missed while being overseas for a couple of months.

My good mate and fellow Zephyr skipper Bernie came around today to see what I was up to and offered to machine up some new cedar floor battens and cockpit trim which will then tick the outstanding issues on 'Slipstreams' measurement certificate; leaving no obstacles in my way come registration and measuring day in February 2018 at the Zephyr Nationals at Worser Bay Wellington. The 'things to do' list continues to sort itself out in a timely manner.