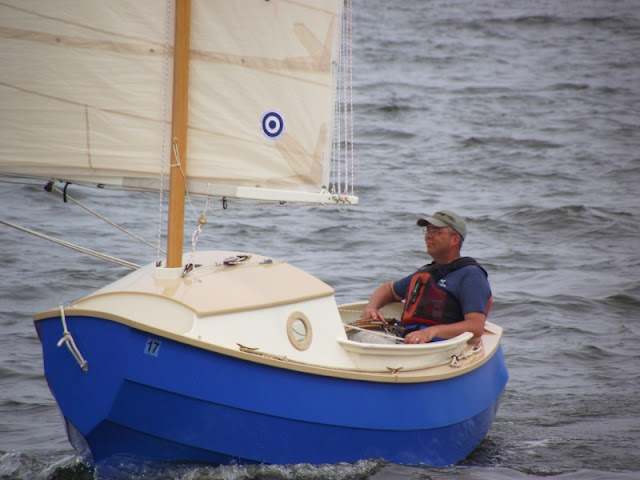 This is the highly popular and successful 'Scamp' designed by New Zealander John Welsford. I have always loved this little boat except for one aspect - its rather porcine looks. The photo above is a rather flattering photograph of this little boat. From this angle she looks ok, in a pram dinghyish kind of way. But alas from other angles she looks, well, not to put too much of a snout on it - rather pig like.

Now don't get me wrong. I like pigs, they are good honest, intelligent animals and in saying so I feel it is a bit churlish to add that I like bacon and eggs with a couple of pieces of toast and a very hot cup of tea for breakfast from time to time - but good looking? pigs are not, really; unless of course you are an pig, with a pigs world view.

My brother agrees. Last week he sent away for a set of plans. If he builds a 'Scamp' he intends to call her 'Miss Piggy'. Fair enough I say, a more honestly descriptive name would be hard to imagine and far more honest than say 'Beautiful Swan', Cleopatra, or such like fantasies ..... and so as I contemplated my brothers possible build (Would I perhaps combine forces with him in this venture and build two together?) ............

............... and whilst flicking through on-line photos of various incarnations of 'Scamp' I came across these images below and in a split second the aesthetic ground fell away, Neptune's trumpet sounded across the boundless main and with a wind of certainty blowing a force 8 gale I watched a pig jump off a cliff top, sprout wings and fly with a plenitude of satisfaction into the maritime air scribing a great arc of seabird symmetry. 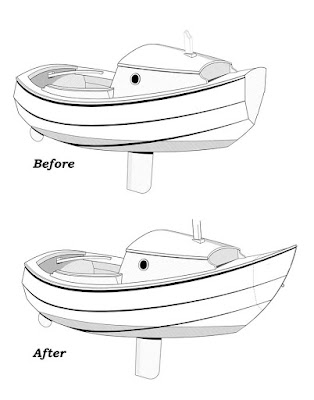 This is what I would call an 'Aesthetic fix' for 'Scamps' truncated appearance. It comes via the boat designing and building company Chesapeake Light Craft. It is a fix that can be purchased from the said company and affixed to the bow of any current 'Scamp' and in my opinion hugely improves the boats appearance. She transforms from Piglet to Seabird before you can say "Where did that awful flat bit go to". The more I look at the "After" version the more the "Before" version looks like a bit of vandalism to an excellent design.

I am aware that current 'Scamp' builders and owners may be inclined to throw smelly old sacks of rotten fish into my boats cockpit and shout "Judas Iscariot" across my bows but all I can say is that beauty is sometimes not in the eye of the beholder, nay it is an ever fixed mark in the aesthetic bones of the nautical cosmos and this "After" version of 'Scamp' is a fine example of said philosophy.


I would very much like to build myself one of these little beauties ..... and while I am doing so it would be an act of artistic conservation if current 'Scamp' owners purchased an 'after market' fix and made their boats presentable (no offense intended : > ) .......  even Cinderella got dressed up (glass slippers even) to go to the ball - and what a ball sailing 'Scamp' must be! 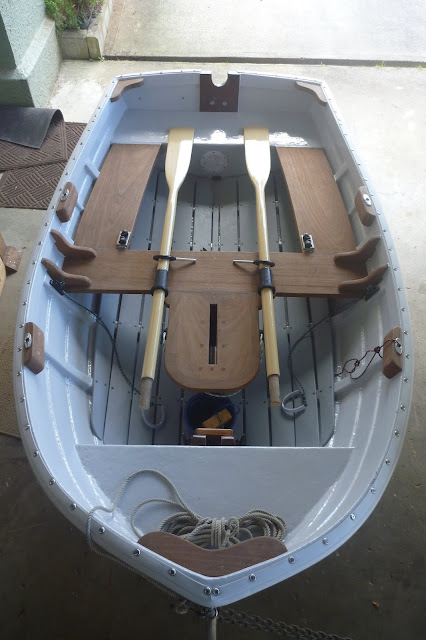 With a sailing dinghy of 'Scouts' size, stowing the oars is a problem. Having them tied to the top of the seats is a clumsy and uncomfortable way to stow them when sailing. Sitting on top of, or clambering over the tops of the oars every time the boat tacks is asking for trouble. 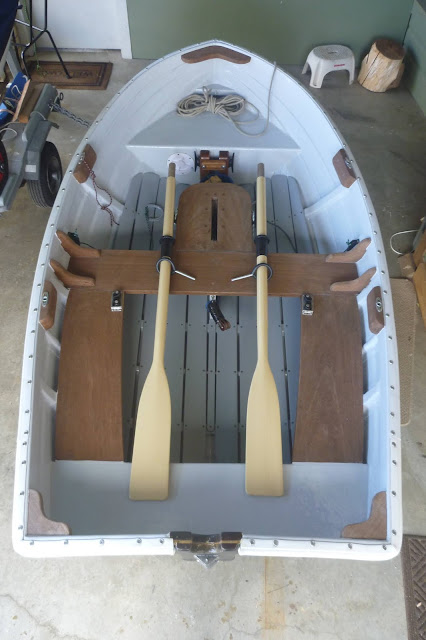 The best place to stow them is under the seats. This is easy enough to do if your dinghy has removable stern and bow seats. 'Scout' doesn't have these, rather she has buoyancy chambers fore and aft. This makes her safe in a capsize but creates a problem for oar stowage. The problem is that the correct length of oars for 'Scouts' length and beam are simply impossible to slide under the middle seat.

The only solution to the problem is to use shorter oars. This is a compromise because with shorter oars the dinghy doesn't row as well. But considering that 'Scouts' main propulsion is under sail I am happy to make the compromise. I took a pair of five foot six inch long oars and cut off slightly less than two inches off their lengths (from the hand grip end) to obtain a snug fit inside under the seats. 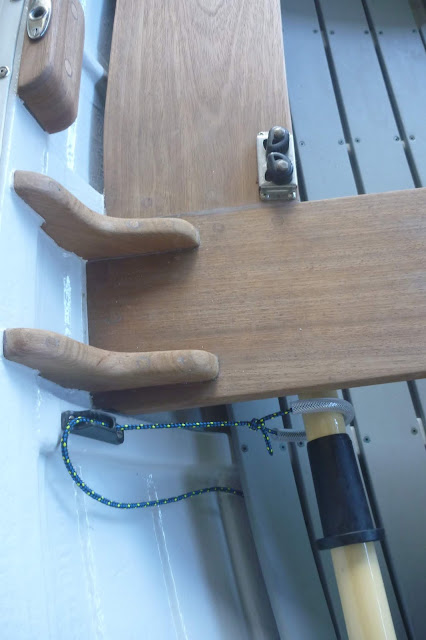 The oars are held under the seats and against the hull using short pieces of cord and jamb cleats. They are firmly in place and won't move or rattle around when sailing. 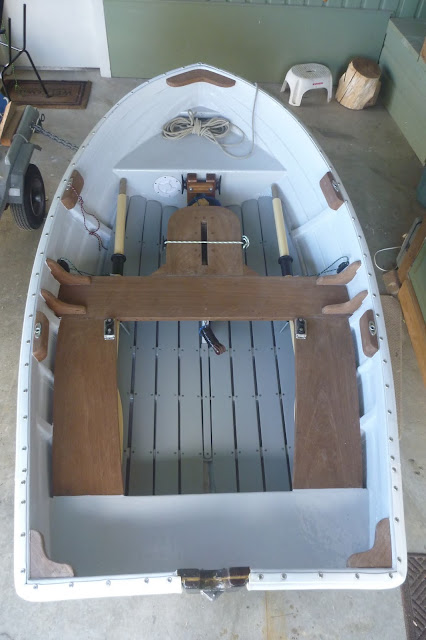 The oars are slid in and out of place place through the stern area, looped through their respective  restraining ropes and cleated off. 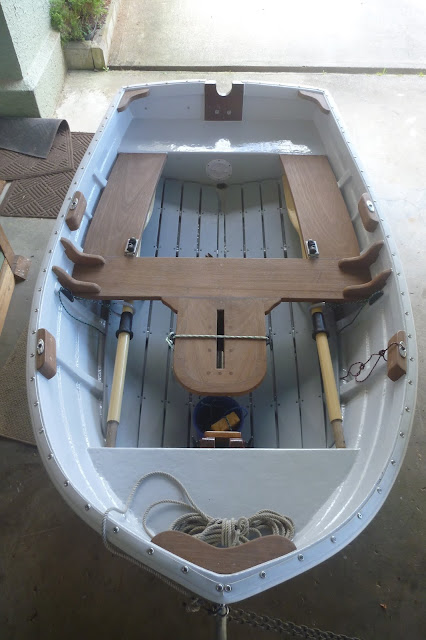 With the oars in place it leaves the cockpit area clear. I am well pleased with the solution. I am also pleased with the way these old oars have scrubbed up with a lick of new paint and new sleeves and rowlocks. I shall try the new oars out on the next sailing trip with 'Scout'. Some time under way rowing will soon tell me whether I have cut the oars too short! 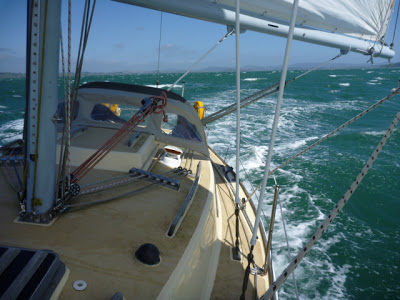 For myself, to sail alone is to go on a spiritual retreat. Silence, reflection and the old familiar routines of a sailor are mixed with the healing power of being close to nature. The wind on sails, a shining sea and the honest boat dance together. They weave their own particular soft sound, a music that you would never mistake for noise. Sailing is like the answer to a question. What was hidden comes into the light; a frown becomes a smile; what is at the center of my being becomes known again; what was lost is found again.

" To sail alone has always had a great appeal to me. Lurking in the dark corridors of my mind has been the idea that out alone on the wide wastes of the sea, it might be possible to lift a corner of the veil that keeps life a mystery to most of us" - Charles Violet

"And Sail, sound and ageless, will float back on the first tide that brings simplicity into confusion, calm into chaos" - Richard Maury

"If anyone was to ask me and I was unguarded enough to reply, I would call it the pursuit of beauty, or truth, and if I were honest I would admit it was largely curiosity, the why and the what and the how at first hand" - Ann Davison

"My dream was coming more and more true. It came to me with suddenness one evening at the wheel, as we slipped silently through the waters of the Koro Sea, bound for Suva. A thin curl of smoke drifted away from our stack into the night, and an appetizing aroma of browning fish came to me as Etera prepared our evening meal. Overhead, the white sails stretched their arms to catch the night wind. They were my sails - my wings - and they had brought me to the sea of my boyhood dreams. I had always planned this, it seemed, but it had been almost too much to hope for. So now my heart was full" - William Albert Robinson 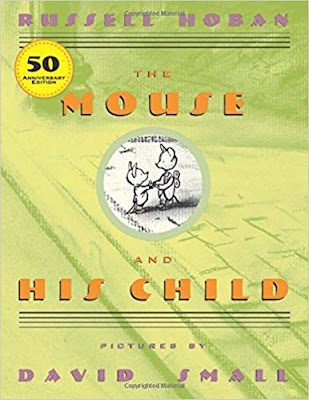 This is the 50th anniversary publication of a book that until last week I had never read. This is surprising because it is from a genre which I enjoy immensely and which I think has much to recommend.

The genre of books where this story fits is the one where animals and/or toys are used as proxies for human beings and this canvas is used to portray the complexities of the human condition in allegorical form, full of symbols and metaphors. Books such as Animal Farm, Watership Down, The Narnia Chronicles, The Velveteen Rabbit, the Pooh Bear stories and The Wind in the Willows come to mind. It is an allegory of the human journey which I guess for us all is in the broadest sense a spiritual journey. I found ‘The Mouse and his Child’ a particularly riveting, highly unusual and inventive example of this type of journey and story telling.

I feel this creative form (Story) is perhaps one of the best ways in which to express the interweaving of these complex ideas. It’s a book I highly recommend and is well worth the effortless read - I found it a real page turner.

THE WISEST OF WORDS - Bertrand Russell, a Message To Future Generations