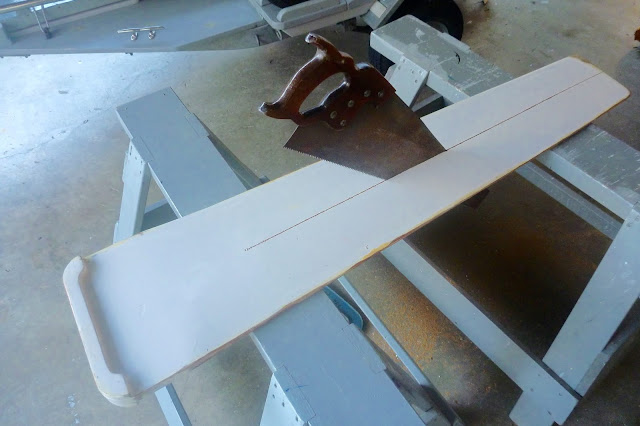 While trying to sort out the mixed racing results in the early months of owning my Zephyr I took a look along the leading edge of the dagger board and found that it had an alarming bend in it. The board was also shorter than the rules allowed. My response was to build another longer straight dagger board. The object of this piece of woodwork is to straighten the bend in the original board so I can use it as a spare. I will also use it as a heavy weather board where there is an advantage in having the boards draft reduced.

The fix is a little counter intuitive. Running a handsaw up the middle of the board reminded me of the other counter intuitive action I took when installing a self bailer in the little Starling I used to own. This involved cutting a hole in the bottom of the boat, an act I had to think carefully about, then swallow hard before proceeding. 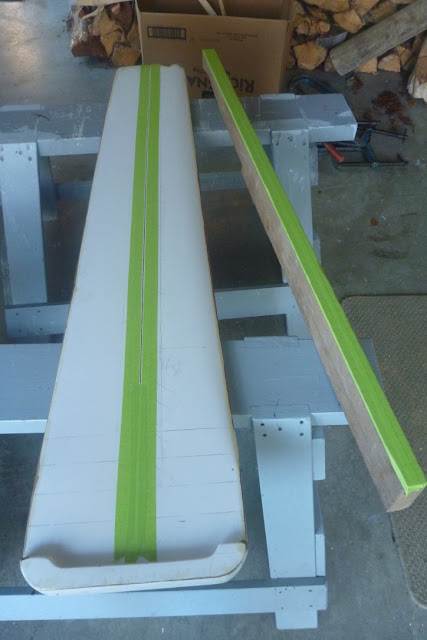 Once the cut had been completed I taped both sides of it. I also taped up the strong back (right) to which the dagger board was to be clamped. 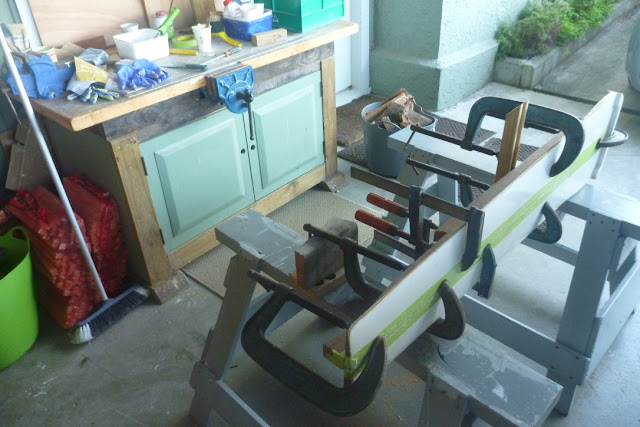 The tape will stop the dagger board, G clamps and strong back from becoming glued together. After mixing up some West System glue I forced it into the saw cut with a putty knife. 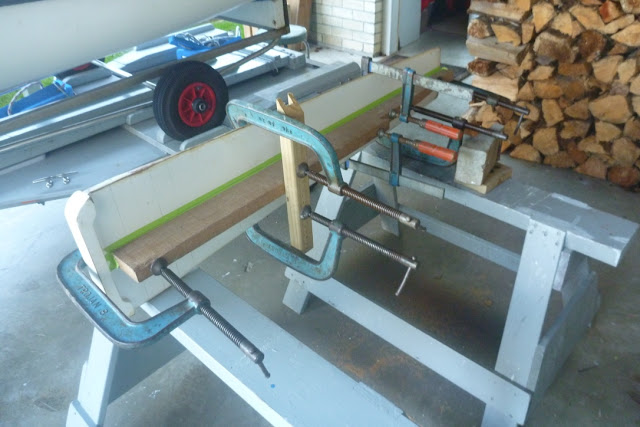 Clamping up the solid wooden strong back has straightened the dagger board. When the glue has gone off and cured I will remove the clamps and tape and tidy the glue line with some sand paper. I am hopeful that the glue line will be strong enough to hold the board nice and straight and stand up to the rigors of its use as a dagger board - time will tell.
Posted by Alden Smith on Tuesday, May 29, 2018 No comments: 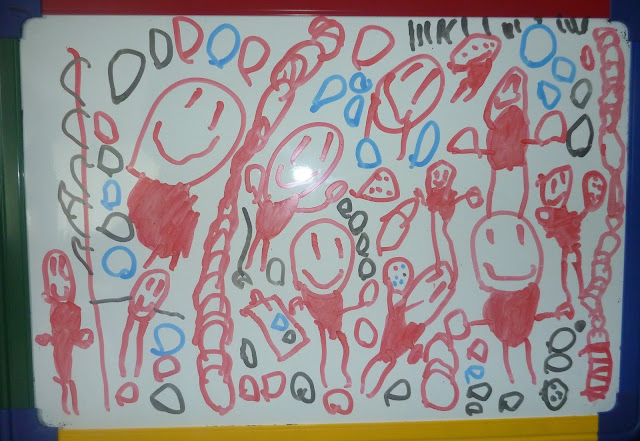 "People Among Chameleons" - Marker pens on white board. Copyright of the Artist - Zane Smith.

The artist is four years old. His interpretation of the background elements in this work changes with the telling on a daily basis. The people of fluid identity in the foreground are a mixture of family and pre-school friends.

Technically this is another brilliant work by the artist. Note the deliberately restricted pallet, the well placed major themes and elements and the use of symbolism. This is a bold and decisive statement by the artist as he leaves the "Scribble Stage" and emerges triumphantly, like lightening out of a clear blue sky into the ''Schematic Stage" of children's art. We look forward with eager anticipation to his seismic emergence into the "True To Appearance Stage" with its attendant dazzling Kilauea energy  : > )

This work is for sale by auction with a conservative reserve price of NZ$1million ....................... Nah, it's not for sale, not only because it's priceless but because it got wiped off the whiteboard yesterday with a piece of cloth. That's the thing with white boards, here today and gone tomorrow as the artist rapidly experiments and develops. But grandads got a cunning little camera that comes in very useful. Thus reviewing, reflection and posterity are all satisfied. 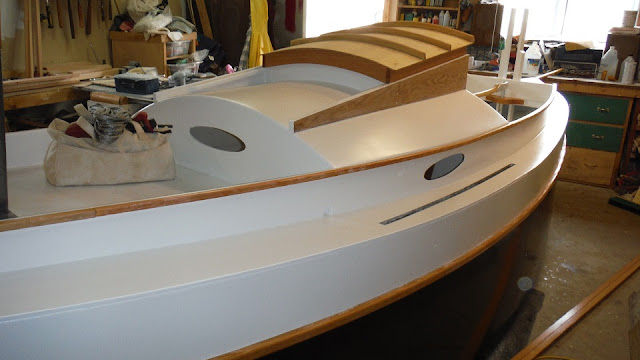 As I have indicated on a previous update - to see the photographs on the site you have to register (easy and no big deal).

This boat is a very special design by John Harris that presses a good number of deep nautical intuitions in the hearts of shipmates everywhere. Can't wait to see her launched and sailing. 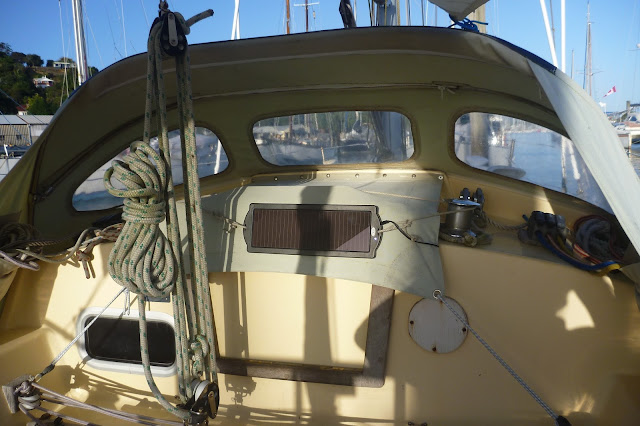 The useful bit of kit in question is centre picture. It is a small cheap (Around $NZ45.00) solar panel I purchased from Super Cheap Auto here in Whangarei. It doesn't re-charge the battery in the usual way, it simply feeds a very low powered trickle charge which maintains the existing charge that is in the battery. This means that if the boats motor is idle for any extended time I don't have to worry that the battery will go flat.

The leads from the solar panel plug into a 12 volt socket that I installed next to the boats battery isolation switches. The positive and negative wires bypass these switches and attach directly to the battery terminals. Because there is no chance of the battery being recharged  there is no need for a battery charge controller - the battery being charged in the usual manner by the diesel engines generator. Shipmates; it's a small but useful bit of kit. 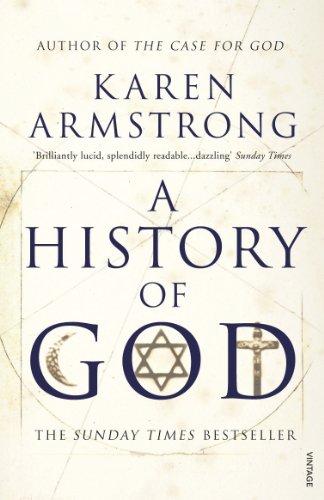 " He had told me that in most traditions, faith was not about belief but about practice. Religion is not about accepting twenty impossible propositions before breakfast, but about doing things that change you. It is a moral aesthetic, an ethical alchemy. It you believe in a certain way you will be transformed. The myths and laws of religion are not true because they conform to some metaphysical, scientific, or historical reality but because they are life enhancing. They tell you how human nature functions, but you will not discover their truth unless you apply these myths and doctrines to your own life and put them into practice."

"I have discovered that the religious quest is not about discovering "The Truth" or The Meaning of Life" but about living as intensely as possible in the here and now. The idea is not to latch on to some superhuman personality or to "get to heaven" but to discover how to be fully human - hence the images of the perfect or enlightened man, or the deified human being. Archetypal figures such as Muhammad, the Buddha and Jesus become icons of fulfilled humanity. God or Nirvana is not an optional extra, tacked on to our human nature. Men and women have a potential for the divine, and are not complete unless they realise it within themselves.

A passing Brahman priest once asked the Buddha whether he was a god, a spirit, or an angel. None of these the Buddha replied; "I am awake." "
Posted by Alden Smith on Monday, May 07, 2018 No comments: 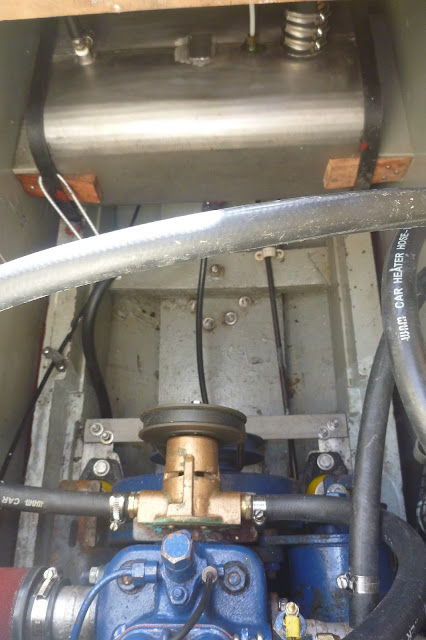 Yesterday I reinstalled the fuel tank and connected up all the hoses and connections. Although the installation was simple enough it wasn't an easy job because the tank is sited behind the engine and aft of the access panel in the cockpit floor making work difficult. 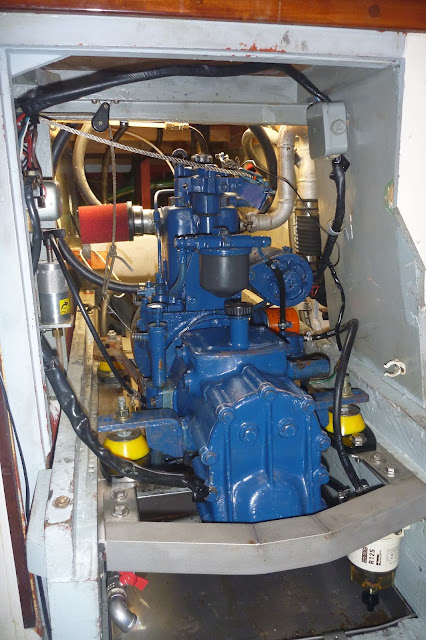 This morning I filled the fuel tank with diesel as far as half way up the filler pipe. This means that the diesel level is well above the tank. I checked the top of the tank (where the leaks have been fixed) immediately, and later today around 5pm. All is well so far without a hint of diesel fuel. You can see the fuel tank in the bottom photo in the background. If the tank shows no signs of leaks tomorrow I will replace and re-seal the cockpit floor and continue with a couple of other jobs.

The main jobs are: 1 - Reconditioning one of the hand operated bilge pumps. 2 - Installation of  the new stove. 3 - Haul out for a scrub and anti - fouling paint. Then I will be sailing. Can't wait.