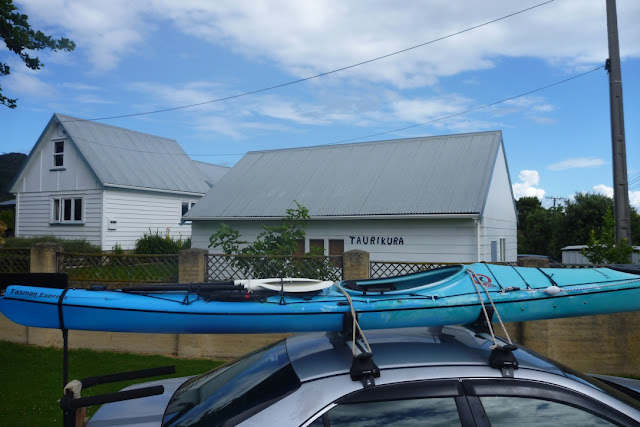 This house with Taurikura written on it is just up the hill from Taurikura bay and opposite the Taurikura General Store. Whenever I launch my kayak at Taurikura I always do my special patented air temperature test. 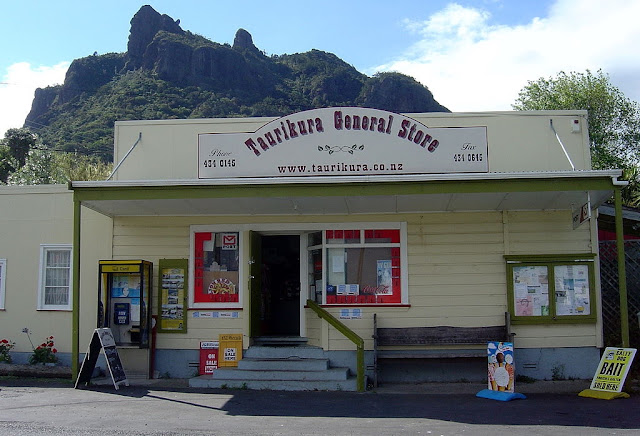 The temperature test involves buying a large Hokey Pokey icecream. Today I failed in being able to lick all melting Hokey Pokey icecream before most of it ran down the cone and onto my hand. This was important empirical information. - Consulting my patented Hokey Pokey Air Temperature Chart I ascertained that today it was extremely hot. I never listen to anecdotal evidence, only a true scientific test meets my standards.

If you have never tasted Hokey Pokey ice cream before (which is considered by people of impeccable culinary taste as nectar of the gods) I suggest you book a flight to New Zealand immediately. 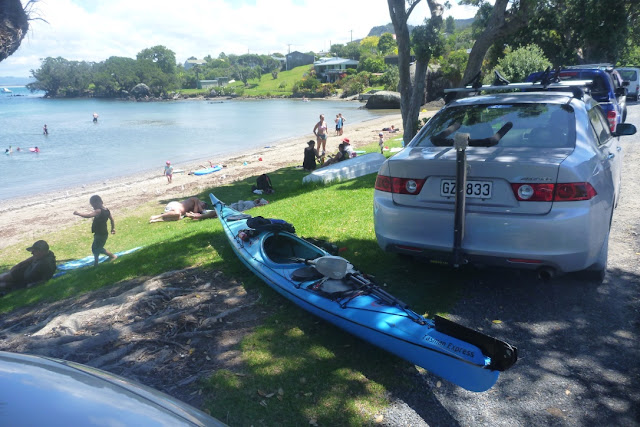 I launched at Taurikura on a typical summers weekend day in Northland. Families were enjoying themselves at the beach. 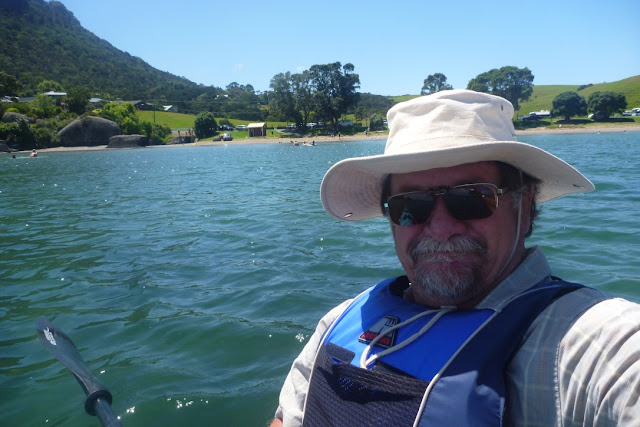 This is moi trying to look cool in my new $23.90 clip on sun glasses - alas cool is a temperature that doesn't seem to suit me - I am better with a HPICCone cone in my hand. 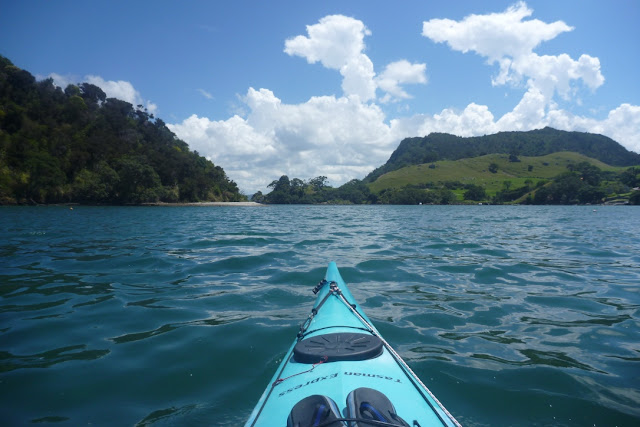 On my way with High Island on the port side and Little Munroe Bay around the headland in the distance. 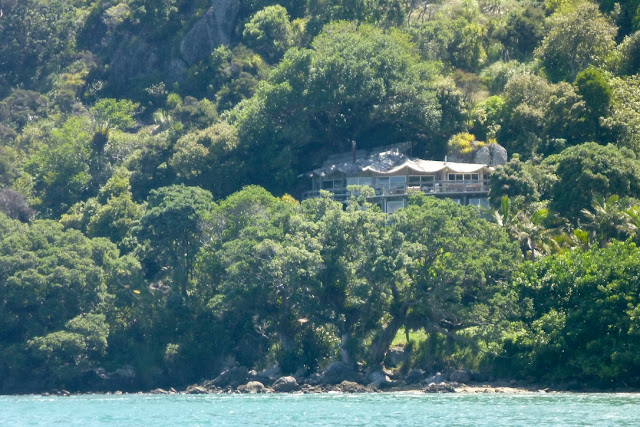 This a house I remember being built in Little Munroe Bay in the 1970s. It has a rather unique rood line. The roof has been constructed by draping hessian sack cloth over large sloping roof beams, reinforced with wire mesh and then plastered with ferro cement concrete. 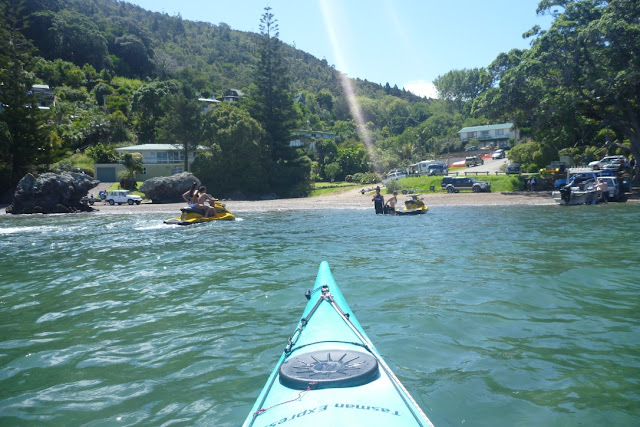 Kiwis at play in Little Munroe Bay. These jet ski thingies are not really my cup of tea, not only because of the amount of noise they make but because the people who ride them seem to want to show off in nice quiet anchorages and ignore all the common sense speed imperatives. 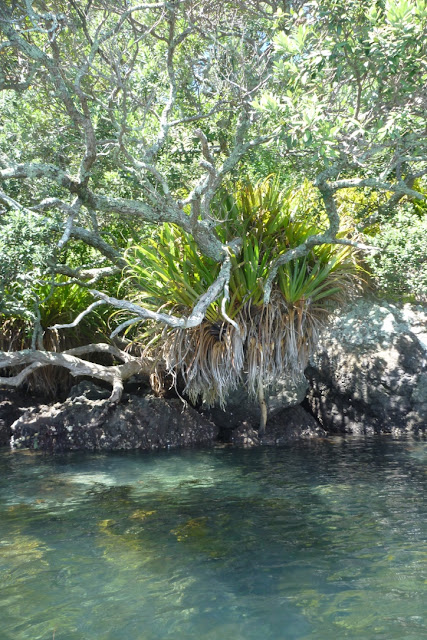 The large flax plant is called an Epiphyte which is a plant that grows on other plants or trees but is not parasitic to its host. I remember being on a school camp and one evening seeing one of these crash down suddenly - thank goodness it didn't happen the next day when we were in the bush doing our camp activities. 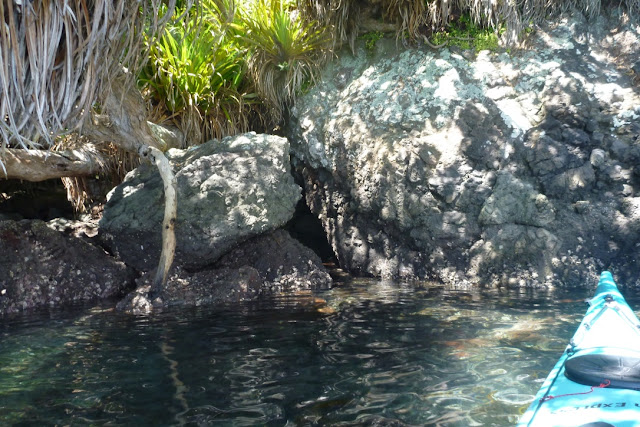 The great advantage of a kayak is the ability to get really close in to the shore. I love this paddling this close shore / water boundary. 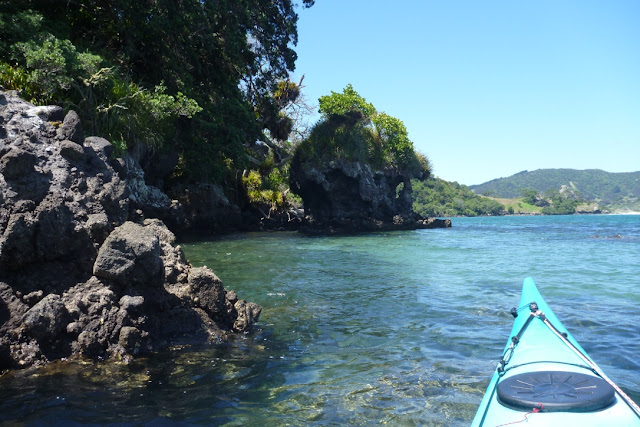 As I drew closer to Taurikura I came upon a wedding taking place under some huge Pohutakawa trees. I actually heard the words ... "Do you Johnathon take ........ " come floating across the water. 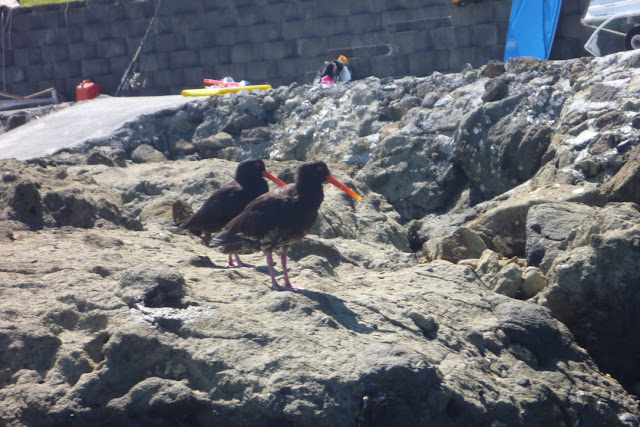 I thought of American Blogger Dan when I took this photo. This pair of birds (wonder if they are formally married?) are of the genus Black Featherus Long Red Billus. 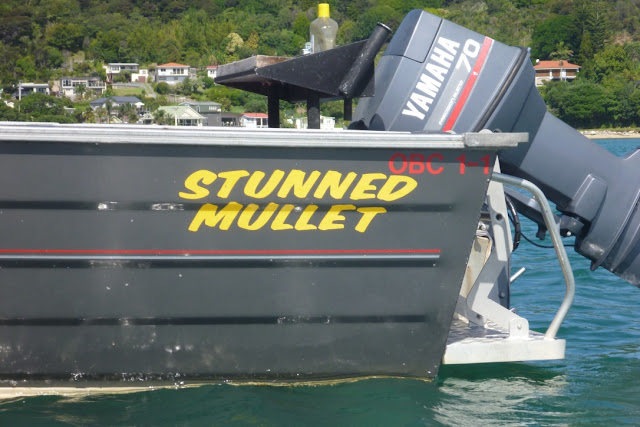 By the look of the big thick wooden filleting board on the back of the boat, if the Mullet aren't stunned as they are pulled over the side of the boat they soon will be. 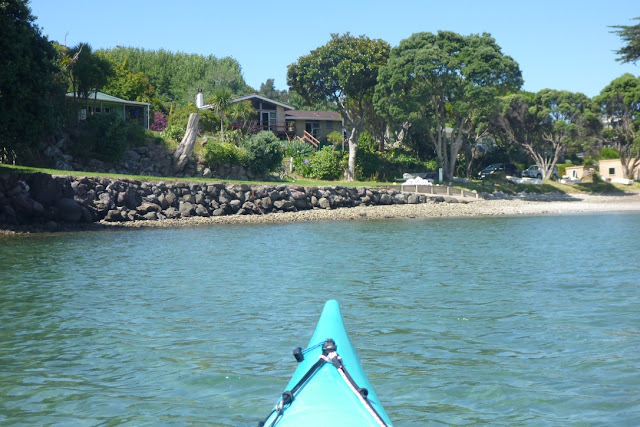 Nice waterside homes in Taurikura Bay. It's always been my dream to live like this but these properties are very expensive. 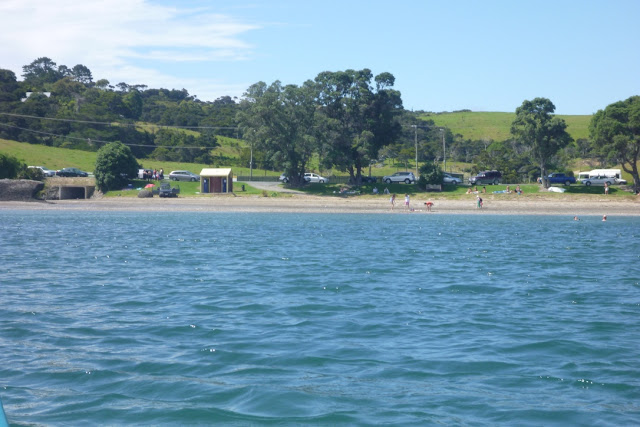 Back to Taurikura beach where I launched my kayak from. 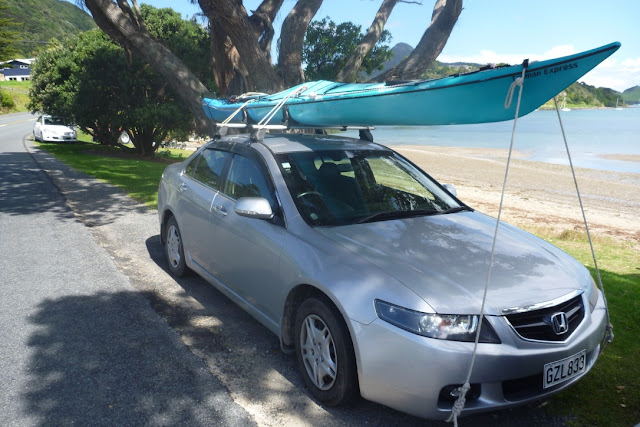 Kayak back on the top of my car and ready to go. I am now all ready for the drive up the hill to the Taurikura General Store and the compulsory daily temperature test. 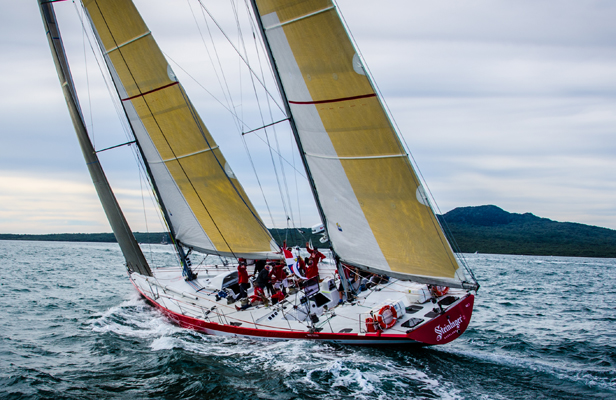 Time seems to go past faster as you get older - I can't quite believe that it has been one year since the last Auckland Anniversary Regatta.

This year I am booked on board for the day with my brother Christopher. He was a bit miffed that I didn't ask him to sail with me and my mate David on Lion NZ in last years Coastal Classic but as I pointed out to him;

"The last time we sailed together was on Mariner when we sailed her back from the Bay of Islands - You were very sea sick and said to me as you chundered over the side, 'Don't ask me to go F - ing sailing again... Ever! "

I was told these words were said (understandably)  under the duress of 'Mal de mer' ....... I am very glad about that as it's always great to hang out and go sailing with my bros.

So we leave the Auckland Viaduct Basin at 8.45am Monday 1st February, ready to do battle under a predicted  sunny sky and 15 knots of Easterly wind - I can hardly wait.

( Berths are available to the general public at $150 pp for the day. The money is used by the NZ Sailing Trust to maintain these great old 'Whitbread Around the World' racing yachts. Both Steinlager 2 and Lion NZ are mainly used by the trust for school sailing programmes ). 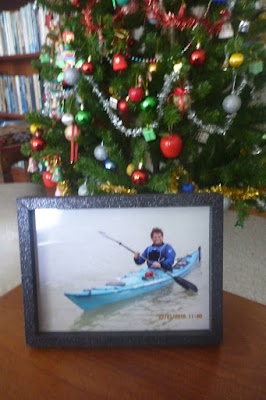 I got together a few days ago with my two brothers Tony and Chris for a paddle on Whangarei Harbour. Unexpectedly today Tony presented me with this framed photograph of moi sitting in my kayak. He said that he thought it was a great photo and decided to get it printed and framed for me - which was a very nice gesture on his part (Thanks Bro) - although I am a bit dubious about having such a large visage of myself following me around the room like the eyes on the Mona Lisa painting. 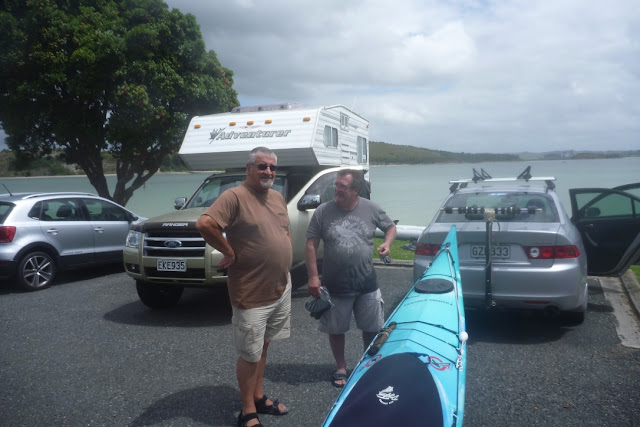 Tony (on the left) and Chris (right) have just given me a hand to get my kayak off my roof rack and onto its launching trolley. My system of a roller bar tied to the bike rack mounted on the tow bar works well and with two pairs of extra hands the job was very easy. 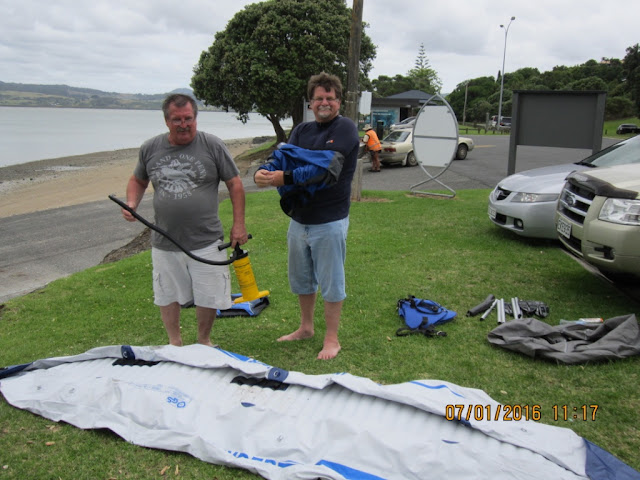 Chris was trying out for the first time an inflatable kayak he had purchased on NZ TradeMe. 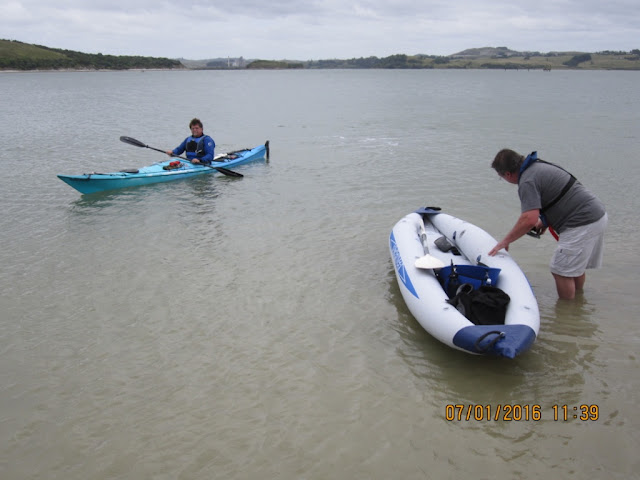 Inflated and ready to go. This 'Pathfinder' kayak is the double paddle version and as Tony declined to be the second crew member (Chris couldn't find the second life jacket among his gear)  I had my doubts as to its single paddle performance in the wind that was starting to blow. 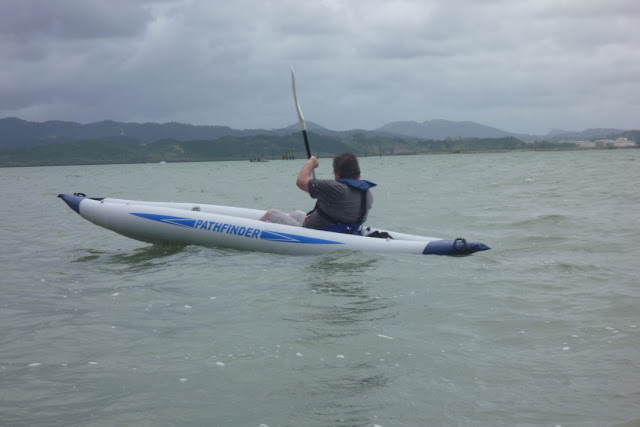 Downwind the inflatable worked well although with the absence of the weight of a second person the boat rode high in the water and would have performed better with a 20 litre plastic container of water up towards the bow. 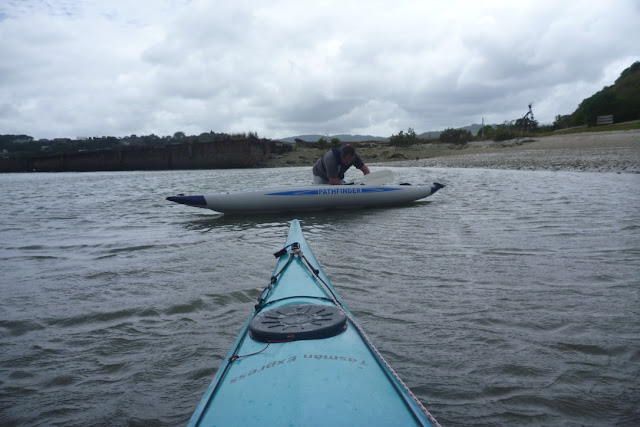 We did a circumnavigation of Limestone Island, an old route of mine. Paddling up the southern side of the island and heading directly into the wind and waves the inflatable made no progress at all. This was despite the fact that Chris is a strong and capable paddler in a kayak. But he found he was going backwards. So Chris got into shallow water with the intention of towing his boat by hand to the top of the island but quickly found himself sinking up to his knees in the mud. 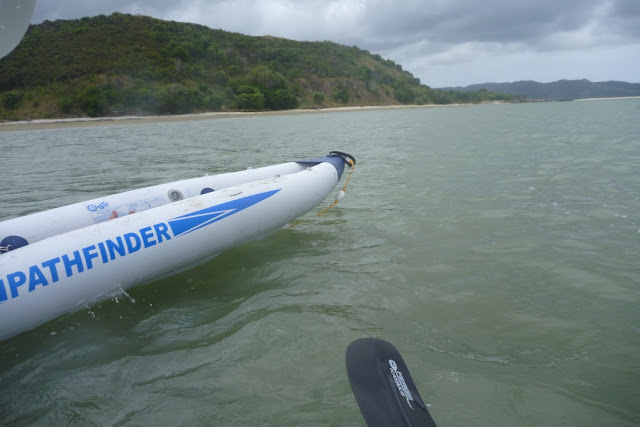 So the solution was to tow him. I was quite happy to do this as it gave me the chance to try out a tow rope I had on board the kayak all set up for just this kind of occasion.  Here the yellow tow rope with its little float is clipped onto the inflatables bow loop. 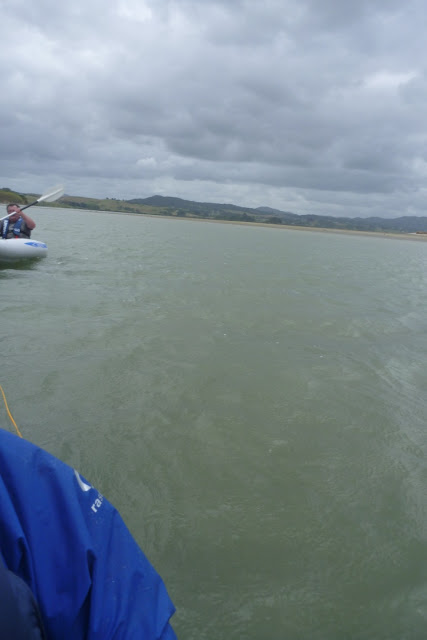 I found towing Chris hard work despite the fact that he was still paddling. I expended about four times the amount of energy for approximately a quarter of the speed I had been doing previously.

I think this experience shows up the limitations of inflatable boats compared with displacement type hulls made of various materials. I have a small inflatable dinghy which works well with a small outboard motor but which is pretty much impossible to row into the wind when it is very choppy and windy making it dangerous in anything other than very moderate conditions. 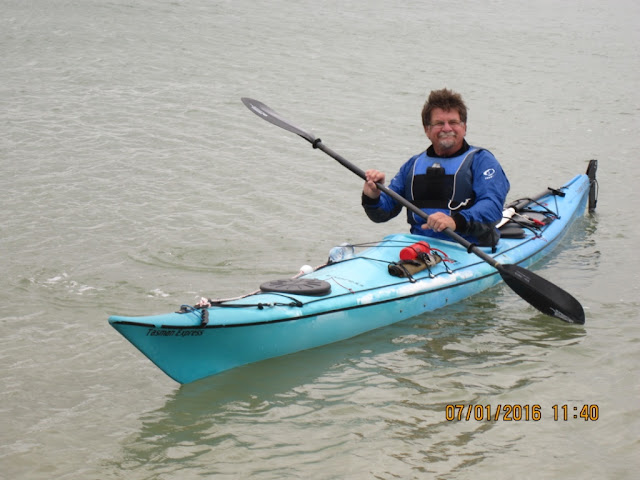 With a length of  5.3 metres (Just over 17 feet) the Tasman Express sea kayak is excellent for day and expedition kayaking. When I get into a rhythm I am able to maintain a good forward speed for long lengths of time, even when loaded up with gear in its generous stowage compartments. The low profile and flared bow enables the kayak to perform extremely well in rough seas and windy conditions. I find the rudder (which is controlled by foot pedals) extremely useful for turning and prevents the kayak from 'weather vanning' in cross wind conditons.

Made of polyethylene I have found the hull pretty flexible and forgiving, especially when I have found myself dumped on the top of rocks by a receding swell whilst engaging in what us kayakers call, "Doing a bit of rock gardening".

Perhaps the biggest lesson of this little trip (or reminder really) was the value of Whanau (family). I love doing stuff with the Bros!


I first saw this utube video on this interesting Blog that I follow:  http://intheboatshed.net/

What is not to like about these little compact packets of fun?  Powered by a small sail on an unstayed mast and steered by an oar over the gunwale they are simplicity itself and they look lightweight enough for even an aging old sailor like myself to lift onto the roof rack of a car.

They don't seem to have any centerboard, the oar and the chine doing the job of lateral resistance ( although there may be a small skeg on the keel line ).

Obviously not designed for open water they seem ideal for cruising around very shoal areas of creeks, lakes and harbours. The only change I think I would make would be to build in a watertight compartment in the bow and stern........ not just to make things easier if you were to capsize ....... but because all sailors in their 60s have the crucial task of playing at Pirates, Explorers and Swallows and Amazons which requires a dry place to store the best kind of  bo'suns stores (Food and drink). 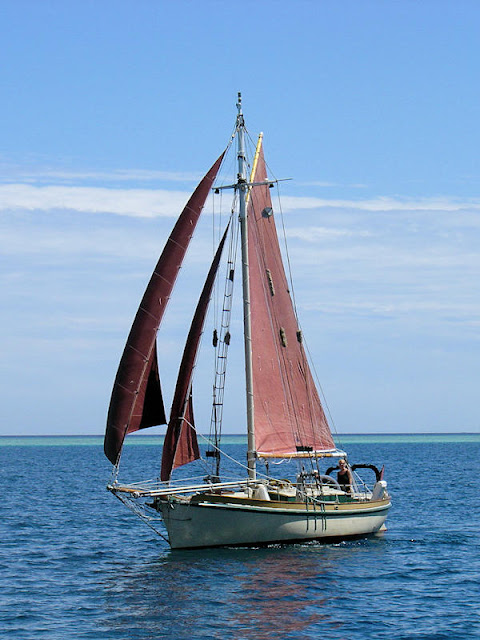 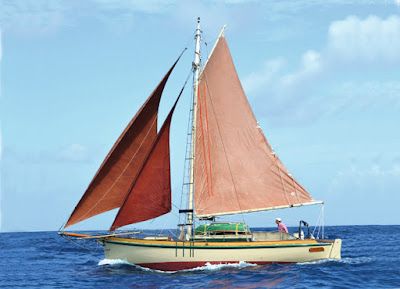 Take the link below to hear the story of the Halabisky family and their life together on the yacht 'Vixen'.