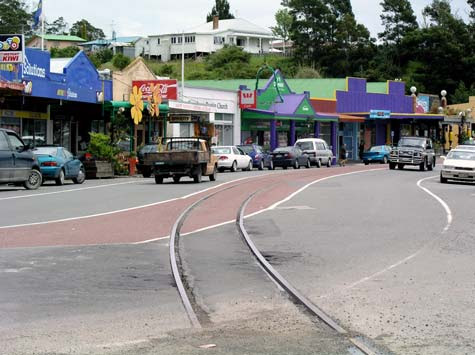 Shipmates, this is Kawakawa, Northland, New Zealand - Where the Kawakawa to Opua bicycle rail trail begins. When the trains are operating they can be seen troundling down the middle of the main street. 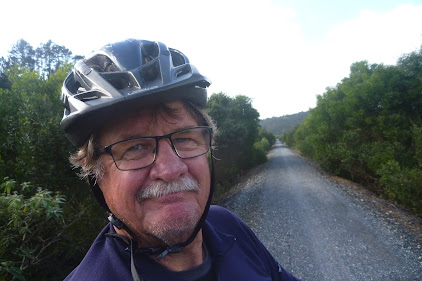 The skipper of the Brompton folding bike. Some say that he shouldn't be steering a conversation let alone a bicycle - but my lips are sealed. 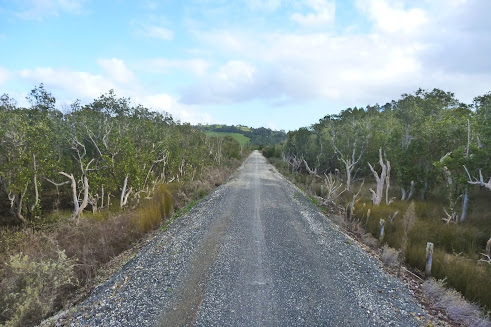 The rail trail sometimes runs parallel to the old tracks but most often (as in the above photo) follows the old rail way lines. Some times the railway lines are buried underneath the track, sometimes they have been completely removed. Railway embankments are usually built quite high giving good views of the  surrounding country. 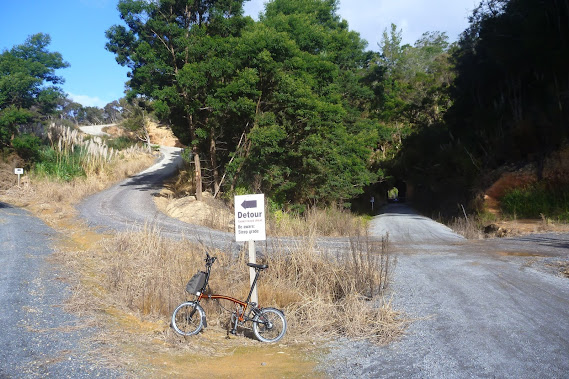 On the right is the only rail tunnel on the trail. It was closed because of falling bricks. There was a detour to the left over the hill. 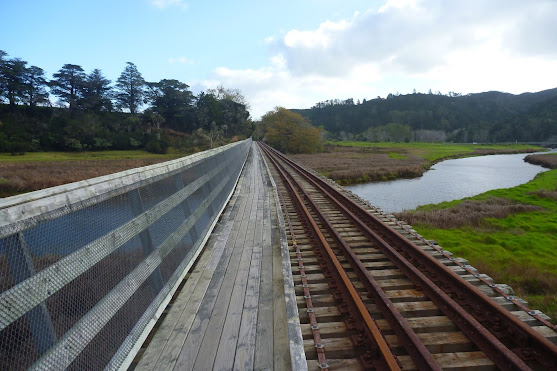 This long section of bridge crossed wetlands that surrounded the picturesque upper reaches of the Kawakawa river. 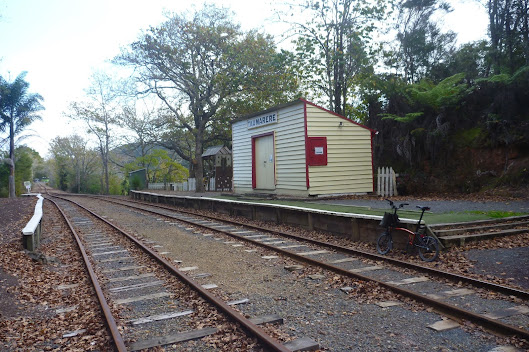 A team of amateur locomotive restorers run their train from Kawakawa and back to this small station during the holiday season. 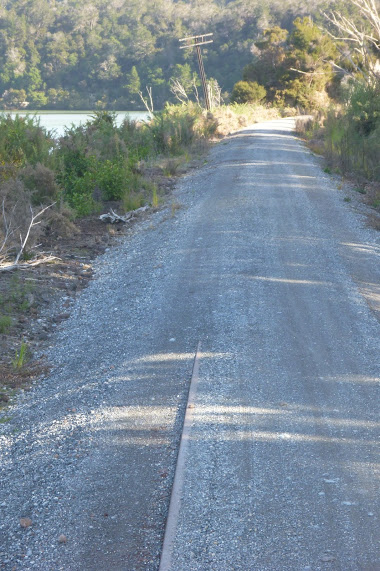 In parts the trail runs alongside the upper reaches of the Kawakawa river. This river  leads to Opua at the head waters of the Bay of Islands. 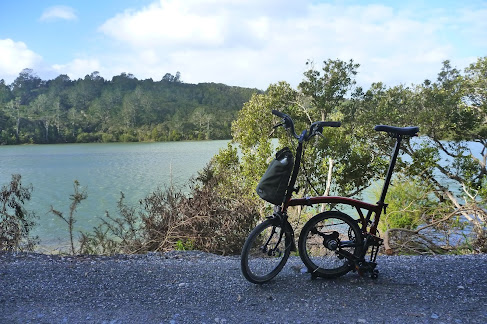 The first of the two main folds of the Brompton folding bike is useful as a bike stand. 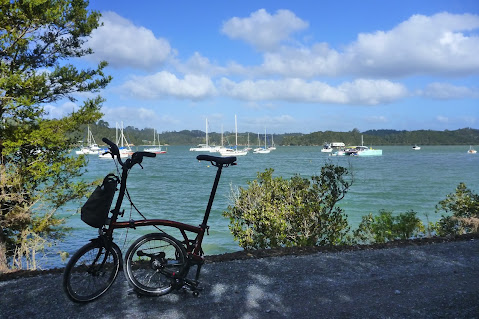 Moored boats began to appear as the river widened and we (Brompty and me) approached Opua. 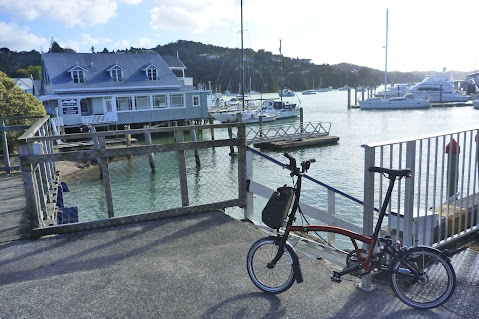 After a relaxed ride we arrived at Opua. It took an hour of reasonably easy riding to get there. Total return time including a lunch break was 2 1/2 hours. After lunch I hopped back on Brompty and returned to Kawakawa. A great first ride on my new bike. Looking forward to the next trip.

Bike Suitability Review: Although the Brompton took this rail trail ride in its stride and performed well it was obvious that a ride on a bike with bigger wheels (The Brompton has 16 inch wheels) on this rail trail would have been more comfortable. The small wheel diameter means that when riding on anything other than smooth urban streets and pathways any trail irregularities are transmitted directly to the rider. The laws of physics means that bigger wheel diameters absorb shocks better. Although I intend to use the Brompton again from time to time on selected rougher tracks my overall plan is to use the Brompton more as my dedicated city street and city bike path exploring (So easy to fold and pack when going away on trips in the car) and use my big trail bike for the more rural off road rail trail type rides. This of course means mounting the bike rack on my tow bar when using the full size bike and all the faffing around that this involves but it's the horses for courses solution. When holidaying the choice of two types of bikes to use depending on the terrain makes a lot of sense. Having said all that one of my considerations is that my Brompton is brand new, expensive and at this stage I don't want to risk wrecking the bike. When the shine wears off the bike you may find me boulder hopping and ski jumping Brompty all over the place.

And....  you only need to go on UTube to find many dedicated Brompton fans who have ridden the Brompton almost everywhere on all sorts of different surfaces. Many Brompton owners ride all over the UK and Europe and one guy has a Utube video showing his ride from the African coast to Morocco.

Anyway I have to go - my long awaited book from the Book Depository has finally arrived from the UK - its title? "BROMPTON BICYCLE by David Henshaw 3rd Edition" and I see on page 157 a photograph of someone towing a sailing dinghy (about the same size as my Zephyr yacht) with a Brompton........ hmmmmm.

Today I did two good, good things. First I went for a sail, crewing for my good friend Don on his Flying Fifteen yacht. We did a couple of club races and as usual the Flying 15 punched well above it's weight. We won both races on handicap. This included beating over the line boats much bigger, faster and newer than a Flying Fifteen - these are boats that actually give us time on handicap and we beat them boat for boat-  AWESOME! Of course we sail the boat well but the way this little boat can keep up with and on occasion beat larger boats, is a testament to the boats 70 year old design - Thank you Mr Uffa Fox.

The second activity that I have just completed about 30 minutes ago was to go for a night ride (a couple of loops of the road around where I live). I don't usually ride at night, but this ride was to try out a couple of lights I have bought for my Brompton Folding bike (A headlight and a tail light). Both lights have multi light settings (various flashing options etc) and it was these functions that I tested especially the headlight which on full non flashing mode lights my way on the road excellently.

It's an overused word and a cliche but I'm going to use it again - The Brompton Folding bike is AWESOME. It's so easy to use that it makes my daily cycling exercise very easily accessible and hassle free - and use it every day, I have, since I purchased it.

Above is a Utube Review of the Brompton by Everyday Cycling. There are a large number of reviews and stories of biking adventures on Bromptons but in terms of summing up the virtues of this bike, this review is one of the best - I couldn't have said it better myself.