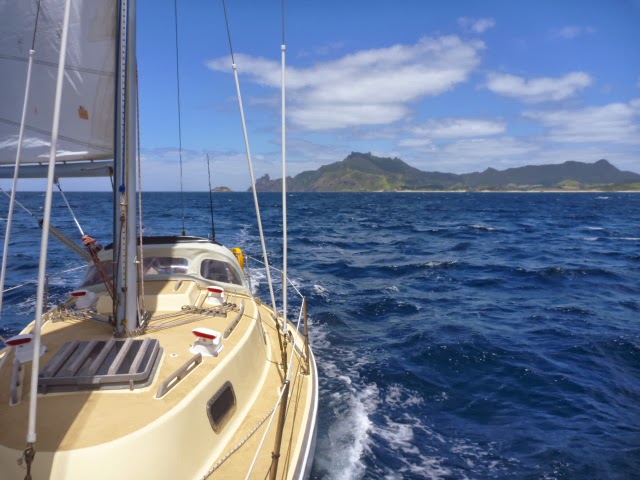 Well, actually it was William Shakespeares' Richard III in the play of the same name who, when unhorsed on the field at the climax of the battle, cries out, "A horse, a horse, my kingdom for a horse!" We didn't end up in  the same desperate plight as poor old King Richard but we could have been I guess, if time, tide, luck and chance had been against us. But we did have our own tricky time. 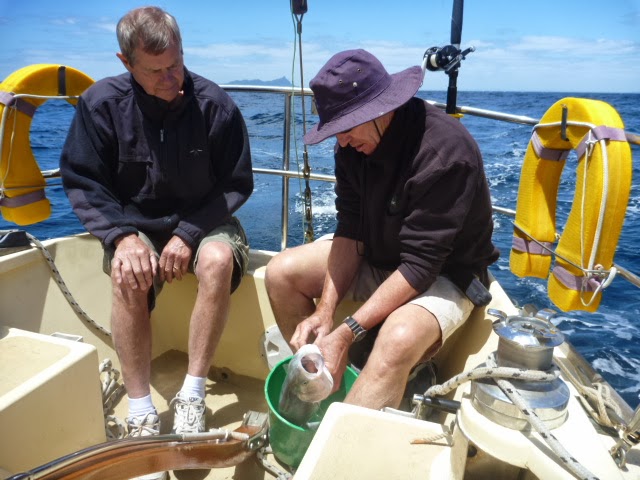 The crew deals to our first fish. Every time we have caught a Kingfish from Mariner it has always been on the first day of a trip and it has always been off Bream Head, the first headland of our journeys north. This one was caught by David (right). Gerry (left) a keen naturalist was able to give us a running commentary on every bit of bird life we sighted - (Prions, Stormy Petrels, Fluttering Petrels, Skuas, Shags, Gannets, Blue Penguins and various Gulls). 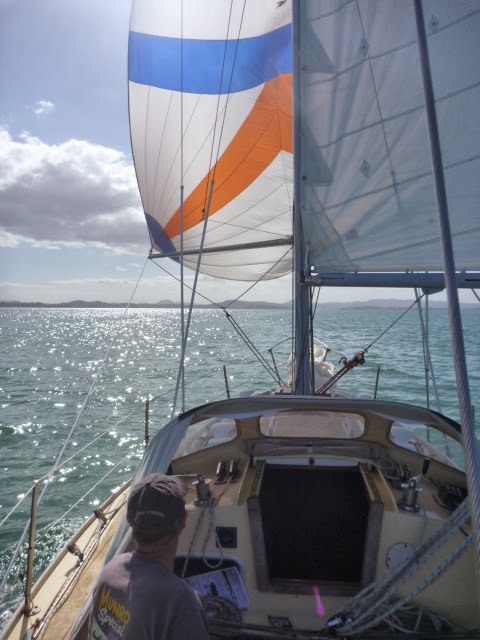 Fair weather saw the spinnaker being flown. A downhill ride with a spinnaker drawing hard and fast is always a joy in moderate conditions - in fresh breezes one gets the taste of what it might have felt like to be a kamikaze pilot. 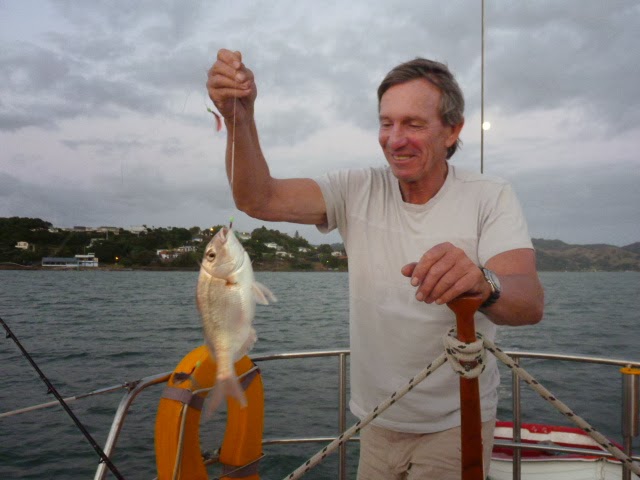 We caught over eight Schnapper off Limestone Island on our return journey. We had to throw half of them back as they were undersize. This one was a couple of centimeters over the legal minimum size. 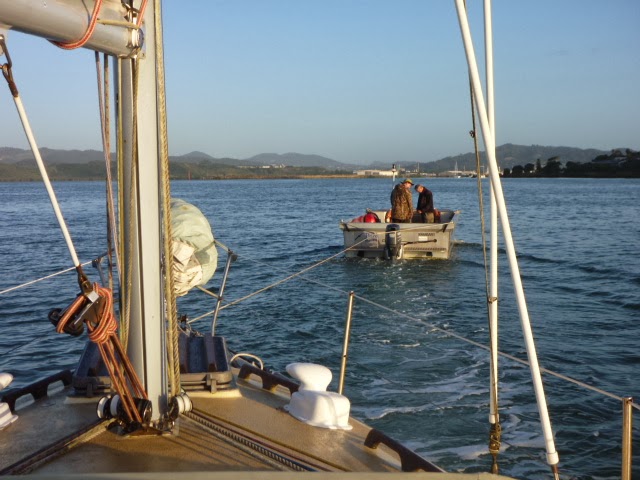 The first set of tight situations we found ourselves in were when entering Tutukaka harbour on the Northern coast. The entrance is narrow and the wind was flukey when tacking in. We then had some fun tacking amongst the anchored yachts looking for an anchorage. I wanted to go in nice and close to the land. This meant weaving in and out between yachts and being given some anxious looks by some of the owners. We anchored in about two fathoms and had a quiet night out of the harbour traffic and swell.
The second tight situation was returning to the mooring up stream of the new Whangarei lifting bridge. The first stage had us anchored for the night off Limestone Island. Gerry who had abandoned all hope of sleeping in his bunk the night before and had retired onto the floor of the boat was very keen to spend the night on Limestone Island in a 'normal' bed. He knew the  ranger (Gerry is on the Limestone Island Trust Board) and was sure of being able to persuade the ranger to give us a tow up river, which he did. Gerry complained that his berth was too short and that it felt like he was being tipped out onto the floor all the time. We replied with, "Gerry, you are English and we rest our case." We could have said, "Gerry you an anal retentive whinging Pommy bastard, not happy with just colonizing the world with your redundant stiff upper lipped world view, you also complain like the Princess and the Pea about having a kip in quite adequate sleeping arrangements, so take your feather duvet, unmanly powder puff pillow pretensions and fuck off ashore to unchallenging luxury".
But we didn't say that, for we on Mariner like to take an encouraging Whanau approach to things. 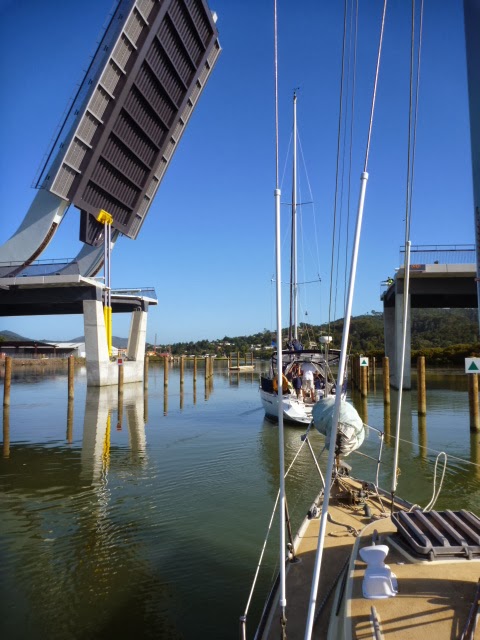 Dave the ranger towed us as far as the bridge, but no further, as he had visitors coming to Limestone Island. We were very grateful for the tow as it is nearly impossible to sail around the last very narrow bend in the river. He left us waiting on the bridge pontoon pondering our situation.
We didn't have to ponder very long because within ten minutes another yacht turned up wanting to go through the lifting bridge to the Whangarei town basin. The yachts owner kindly towed us up channel, past the bridge where close to our mooring piles we cast off the tow line and coasted up to the mooring. 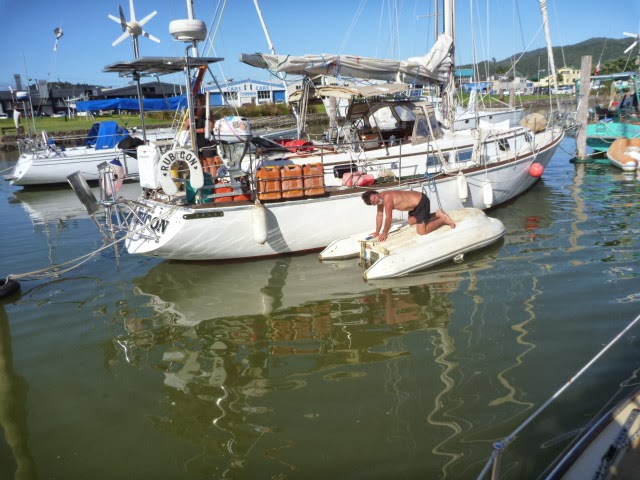 As we coasted in we watched with amusement at the manner in which the owner of this overseas yacht was cleaning his dinghy. He had flipped his inflatable upside down and was vigorously scrubbing the bottom with a brush.
It was a short but eventful trip. All I have to do now is fix the engine so we can go on another sortee up the coast or out to Great Barrier Island (My goal for the next trip as I haven't been there in years) - but I am faced with some very major work which may entail replacing the old engine - time consuming and expensive. In the mean time I have thrown myself into doing a good job of work in the classroom at my school and are ignoring the compelling voice of Richard III. 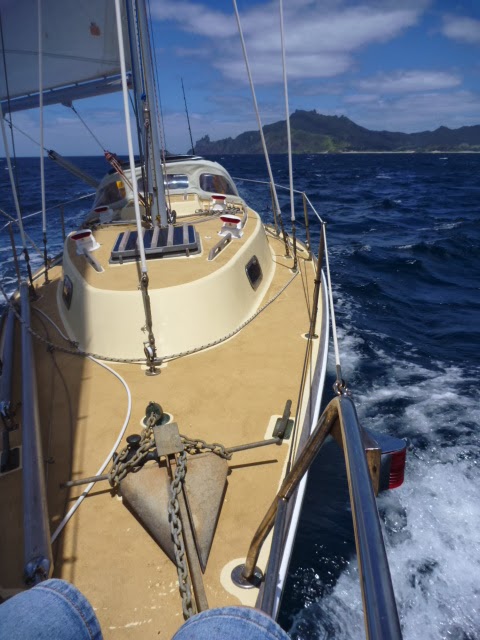 Here I am headed North with a couple of friends. The motor blew up just as we approached the first exit through the new Whangarei lifting bridge. It was a case of aborting the mission there and then or continuing on with our brief holiday and taking my chances at being able to get in and out of anchorages and make passages without a motor. Small auxiliary diesel engines are very useful on small yachts as they enable you to get in and out of tricky harbour entrances and among anchorages when there are a lot of other yachts at anchor. Engines are also good when there is no wind and there is a set return date. I thought "Bugger this, if it was good enough for Abel Tasman, Captain Cook, Maori since circa 800AD and every other man and his dog to have tootled around these waters without the aid of an engine then I would take the chances of a skinny white man with a dodgy ticker and sail engineless".
I thought hard about the implications but knew that my experience and sailing skills would probably keep us safe, which they did. We had a fine old trip, be it short, but it contained some interesting situations that I had not be involved with before. More of that in the next post. 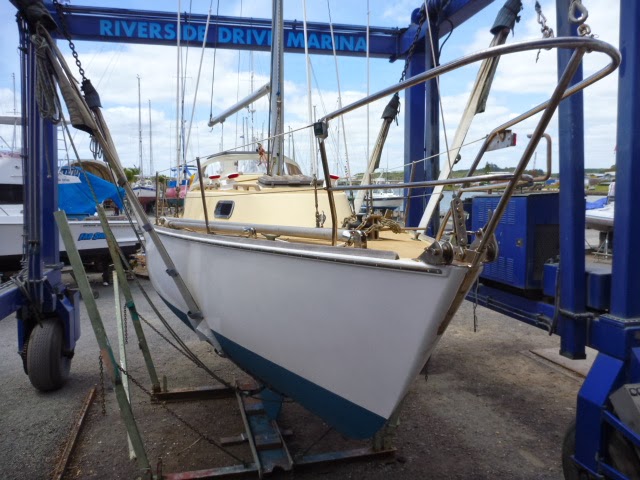 After what was a lot of quite pleasant but hard work Mariner was put back in the water and onto her mooring. As I motored back up the river I was not getting any water coming out of the exhaust which meant that something drastic was wrong. Back on the mooring I fixed or thought I had fixed the problem - I ran the motor and cooling water was flowing and exiting the exhaust - but the problem persisted later with some decisive consequences which I will fill out in some following posts.