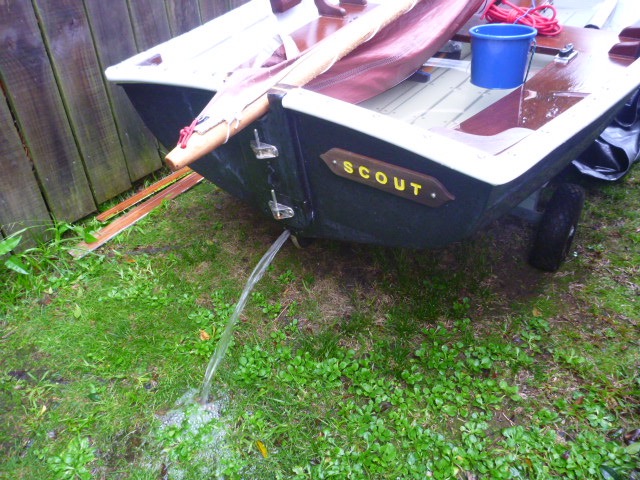 Note the bucket floating like a blue duck on 'Scout Lake' and the water cascading from 'Scout Waterfall' in the foreground.

Well shipmates, it happened like this. Just before a large low pressure system dropped billions of tons of water on Northland I removed the cover on Scout, took the bung out of the back, drained a small amount of water out and left the cover off to air the boat. Later the deluge began. Rather than run out and put the cover back on I thought that I would just leave things as they were and let the rain give 'Scout' a good clean AND yes shipmates you have guessed it already. After draining the boat I REPLACED THE BUNG. Well, today, after a week of continuous rain I went out to take a look behind the shed and put the cover back on and the rest, as they say in all the small dramatic stories is history. It did make me smile to see the blue bucket floating around and hear 'Scout' say to me "Pull the bloody bung out you dickhead and try and be a bit more aware in the future". "Sorry Scout old mate" I muttered, "I just wasn't thinking". It doesn't pay to wander around on autopilot.
Posted by Alden Smith on Monday, June 01, 2020

Of course, next time you put Scout in the water you’ll forget to put the bung in. Or at least I would.

I have a cunning plan Barubi. I am going to attach the bung on a short string by the drainage hole - of course as you so rightly suggest I will forget, BUT I won't have to go searching for the bung, I will know exactly where it is and as the water rushes in I will put it in the hole before the ship goes down. That's the plan anyway.

On a very old Wayfarer dinghy (no 176) we had bronze bungs which were permanently attached to the through holes, wish I could find some for our current dinghies. Nothing worse than getting ready only to realise you've lost a bung, but cut down corks work if you are near a friendly bar. Sounds like Scout survived the load of all that water which is a relief.

Max, I do have some plastic drainage inserts that come with bungs with attached retaining clips which may work with 'Scouts' setup - so I'll try one of these.

'Scout' is built of solid fiberglass with some pretty stout ribs which I have added so she is pretty strong. But the weight of water would have been huge.

I am old enough to remember those bronze bungs! along with those old fashioned fold down bronze rowlocks.

A lesson in mindfulness Dad!!!!