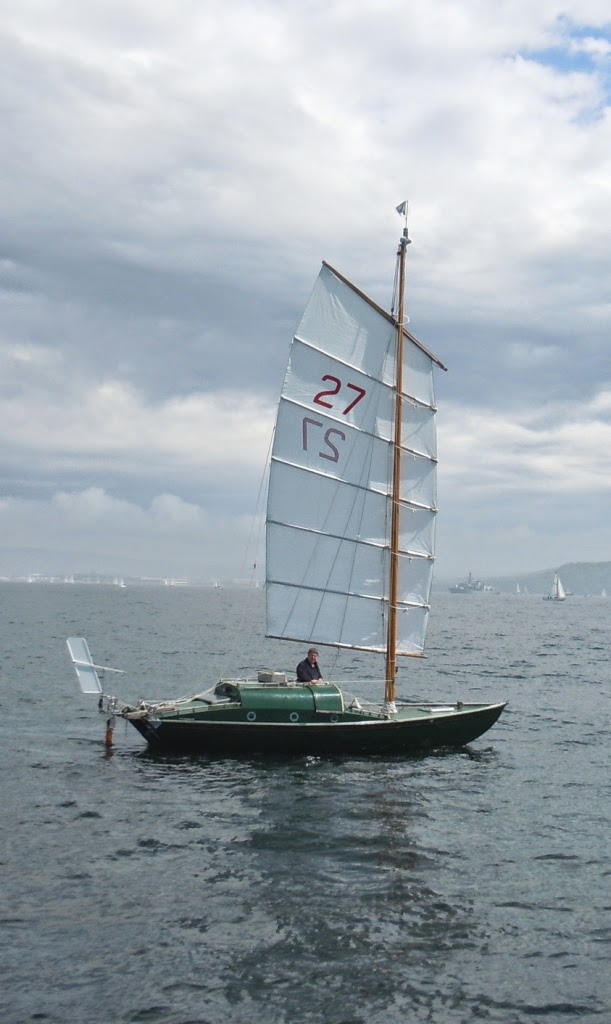 Well shipmates, anyone immersed in yachtie folklore with the degree of obsession that this writer has knows about this little boat. She is the famous converted 'Folkboat' Jester. The only original part of the Folkboat (a class of yacht with its own illustrious history) is Jesters hull. The deck, cabin and rig are additions by Hasler. She was conceived and built by Colonel 'Blondie' Hasler back in the late 1950s.

Colonel Hasler is well known for his involvement as one of the 'CockleShell Heroes' of WW2 during the commando raid 'Operation Frankton'. Six canoes were taken to the area of the Gironde estuary in France by submarine. Twelve men paddled up river and successfully placed limpet mines on Nazi ships. Two men survived: Hasler, and his number two in the canoe, Sparks. Eight were caught and executed by the Germans, while two died from hypothermia when they capsized. Prime Minister Winston Churchill stated that the mission shortened the war by six months. Admiral Louis Mountbatten, called the raid "the most courageous and imaginative ever carried out by the men of Combined Operations during World War Two."

After the war Blondie Hasler was one of four crews in the inaugural single handed Transatlantic race along with Francis Chichester, David Lewis,Val Howells and Jean Lacombe - all yachting legends.
He was also influential in a number of other areas. He designed the Hasler Wind Vane (which is attached to the stern of Jester in the photo) which enables a yacht to self steer. He took Jester to Loch Ness and made a thorough search for the Loch Ness Monster! (Something any yachtie worth his salt would do - having a good reason to sail on a Loch must enhance the experience!
He was also an early pioneer and promoter of the Chinese junk rig which is known for its simplicity and ease of operation. The rigging and reefing of the mainsail and the steering of Jester is operated from the steering position without going on deck at all. Hasler married at the age of fifty a woman nearly half his age and went on to live a fruitful and interesting life farming and building another small experimental yacht and being involved in other interesting design projects.

Now the yacht in the above photograph is not the original Jester. Let me explain. In 1964 Jester was sold to Mike Richey who sailed her in every OSTAR (Observer Singled Handed Transatlantic Race) (Observer being the sponsoring English newspaper) with various degrees of success until 1988 when Jester was lost and sunk in a huge storm. This was the second time she had come to grief. In an earlier OSTAR she had been hauled aboard a passing ship like a huge fish after suffering damage in a storm.  At this point in yachting history Jester had become such an icon of the OSTAR, so well known in the anals of small boat sailing and being much loved by the yachting public, that a trust was formed and a new exact replica of Jester was built and presented to Mike Richey. It is this Jester that is in the above photo. Richey sadly passed away recently at a ripe old age and a life of sailing his beloved Jesters. I am not sure who now owns and sails Jester but I will find out.

Whilst Googling for this post I found out something I didn't know. That is, a sister ship to Jester exists. Her name is 'China Blue' and what a fine little craft she looks in the photograph below. 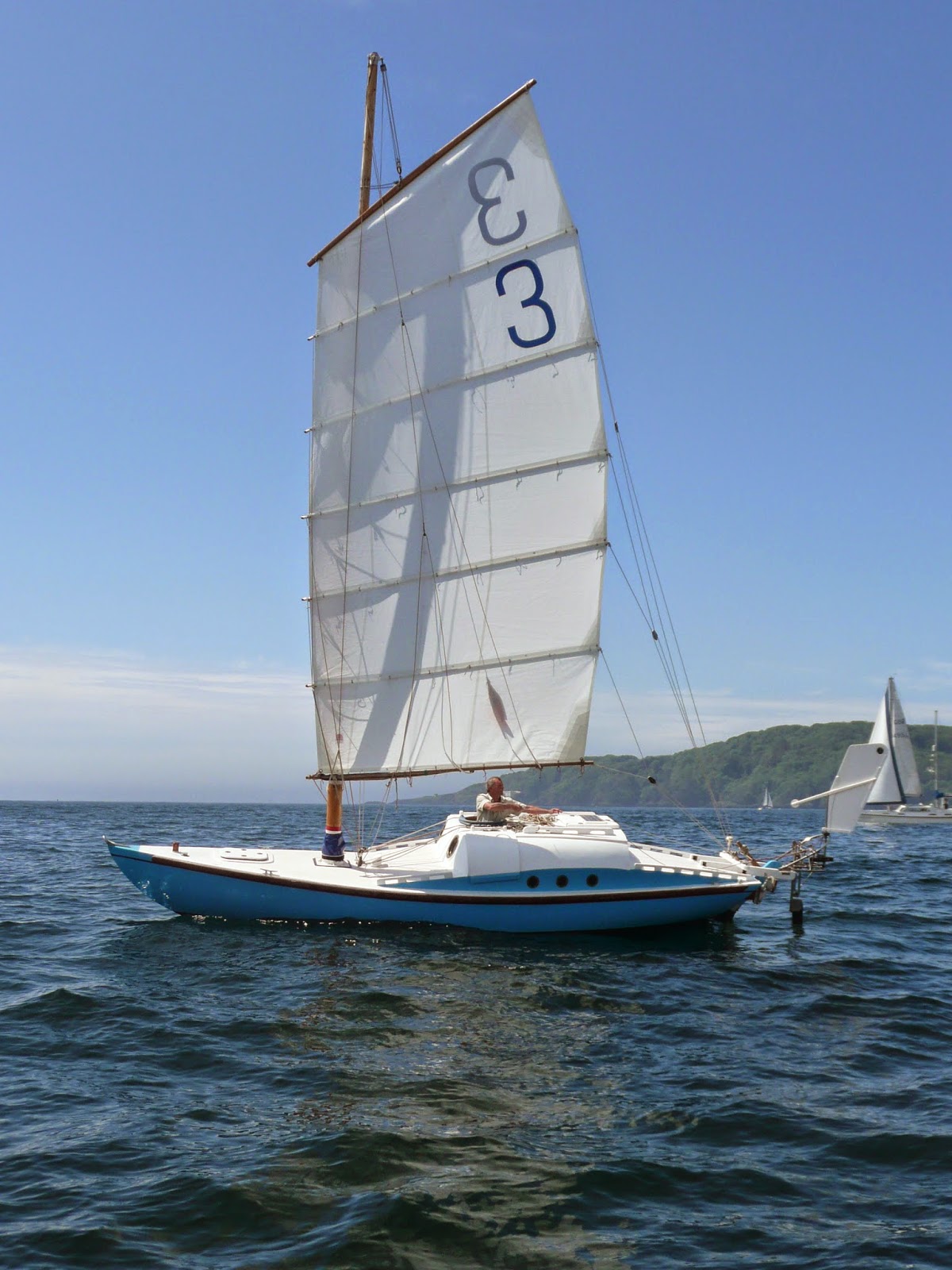 From a classical point of view these are not beautiful yachts but I find them strangely attractive. The attraction is one of function over form. Functions that have been planned and created by Blondie Hasler in the same inimitable way he designed a kayak that could be loaded down a submarine hatch for the raid in France, a self steering wind vane and an adaptation of the junk rig for a small yacht which sailed into yachting history.

Hi Alden,
What a very interesting story!
May be this yacht is a solution to your plea for a smaller boat and easier to handle sails in your last comment.
Is Hasler - the - inventor of the wind vane?
How close to the wind can you sail with a Junk rigged boat?

Yes Ben! - I think a small Junk rigged yacht for the old and less agile would be a good solution for old age sailing and maybe one that I might embrace some time!! - The disadvantage of the Junk Rig is that they do not sail as close to the wind when the boat is close hauled as the modern Bermudian rig. The other disadvantage is that the small junk sail is all that gets set and reefed - no big jibs, no spinnakers. So it's all a bit of a trade off - simplicity and ease of use traded for speed in light conditions and the ability to point close to the wind.

"Wind Vane Steering for yachts was first developed as a practical device for model yacht races in the early thirties. It was not until 1955 that effective vane gears appeared on full size yachts - Ian Major's Buttercup and Michael Henderson's Mick the Miller.
When Blondie Hasler originated the Observer Single-handed Transatlantic Races it gave a great boost to vane gear development."

This is the 'Jester' site that has a lot of good information on Jester and the Hasler self steering gear http://www.jesterinfo.org/jester.html

This site has some great information on the Junk rig -

The Junk rig is now well established as an alternative rig in the cruising community and there have been many great successful small boat voyages made using this rig.

I believe Trevor Leek is the current owner of Jester and Tim McCloy is the owner of China Blue.

Gerrit - Thanks for that information. The Junk Rig is growing in popularity here in New Zealand. There are several Junk rigged yachts close to my own moored yacht today - whereas in the not too distant past there were none.

Hey Alden, regarding the junk rig; I recall (I think) Val Howells noted that Jester aS pointing higher than other OSTAR entrants - the smaller ones at least. Downwind, the fully battened main can be set very square to the wind ... like a spinnaker.Sail area is up to the sailor, Mingming II was over canvassed, for light weather sailing as its easily reduced, no hassles with that.
Some refer to the Bermudan rig as a sliced white bread version. For singlehanded a spinnaker is a bit too much to handle, easier to hoik the junk rig out.
Regards Terry

I am surprised regarding Val Howells comment, I thought that the junk rig did not point as high as the conventional Bermudian rig.

You are correct about the downwind advantages of the rig, the ability to set the mains'l very square to the wind is an advantage.

I think the overall advantage of the Junk rig is it's handiness and simplicity of use. Also it must be relatively inexpensive to set up since large winches or any mast rigging is required.