Well shipmates, if you are familiar with the writings of Francis B Cooke, Albert Strange, George Holmes, Maurice Griffiths and his 'LoneGulls', Charles Stock and his  boat 'Shoal Waters' and that whole pantheon of small boat sailors who sail in thin water then you will be familiar with Erskine Childers and his classic book 'The Riddle of the Sands' published in 1900. My first reading of Childers book must have been 50 years ago, yikes!!

I pulled this book down from my shelf a few days ago and began reading it again for the third time. It's attraction is not simply that it is a very well written, riveting, ripping yarn, it is also because it captures the ambience and flavour of small boat sailing in shoal waters in a compelling and believable way - a fact that is no surprise considering the author Erskine Childers was a small boat sailor of wide experience who had spent some time sailing around the channels and sand banks of the German (East) Frisian Islands which is the setting for the book. 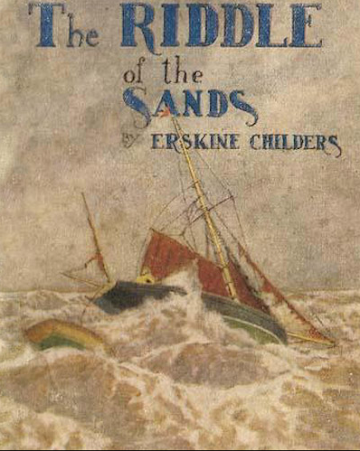 When I was well into my third reading I remembered that a film had been made based on the book which I had watched many decades ago. Happily I found the film on UTube here: https://www.youtube.com/watch?v=ZqNy6mH6FCg

In the film some liberties have been taken with the original plot which is often the case when books get dramatised in films. But when coupled with reading the book I found it informative and complementary.

The yacht 'Dulcibella' is described in the book as a converted double ended life boat conversion with a round counter stern added. A very good authentic life boat conversion reconstruction of the yacht 'Dulcibella' was built for the film. Apparently the only thing inside this reconstruction was a large Mercedes diesel engine (the interior boat filming was done in an off boat studio set). Of course none of this is obvious in the film and I enjoyed the many sailing scenes which helped describe the mood of the sands and channels where the adventure unfolds.

I highly recommend the Book and the Movie - but if I had to choose only one - the book wins outright.

Yep, preaching to the choir. Read and enjoyed this book years ago. Should pull it out of the book shelf and read it again

Yes, many of us do sing from the same song sheet and I am certain we are all perfectly in tune : >)

I am sure that if you read it again you will enjoy it - it's a great yarn and despite being written about 120 years ago it still has an immediacy and relatedness.

I've read the book at least ten times - each time a new (or secondhand...) edition. I enjoy it so much that I force it on the next boaty person I meet up with...

On a more sombre note, it's coming up to 100 years since Erskine Childers was shot by the Irish Free State - he was on the anti-treaty side in the Irish civil war. As a skilled and dangerous propagandist (the Riddle is a great example), the government forces were out for his blood. He was captured while in possession of an ornamental pistol given to him by Michael Collins prior to war: https://www.historyireland.com/poltergeist-pistol/

His Colin Archer designed and built yacht is on display in the National Museum/Collins Barracks site in Dublin: https://www.museum.ie/en-IE/Museums/Decorative-Arts-History/Exhibitions/The-Asgard

And his son, also Erskine Childers, became President of Ireland in 1973!

Yes The 'Riddle of the Sands' is a real classic and a book not to throw away as the urge to read it again can come visiting at any time.

I agree that the Riddle.. is very political and a compelling piece of propaganda. I have read claims that it contributed to bringing about WW1 - a moot point, but I think it may have had some influence on British Admiralty thinking.

It is ironic that Erskine Childers whose famous book is shot through with English patriotism lost his life in the cause of the establishment of the Irish Republic - I think being an English patriot with strong sympathies regarding Irish independence are not mutually exclusive positions.

Surely the manner of his death is a travesty, full of political mendacity and revenge - but sadly such is the way of the human race. I guess his son becoming the Irish President is a redemption / justification of sorts, but I am sure his son would have rather have had his dad alive.

Thanks for a reminder about the Asgard. We visit the UK (Children and grandchildren domiciled there) so I will put it on the list of places to visit.