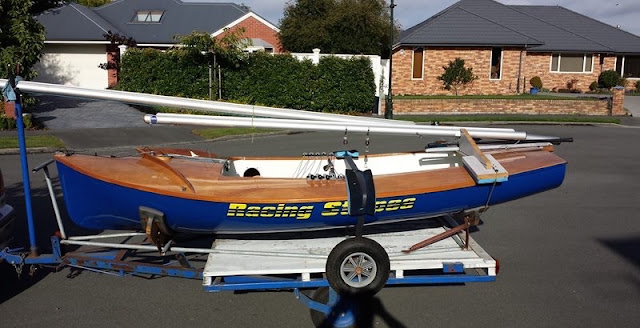 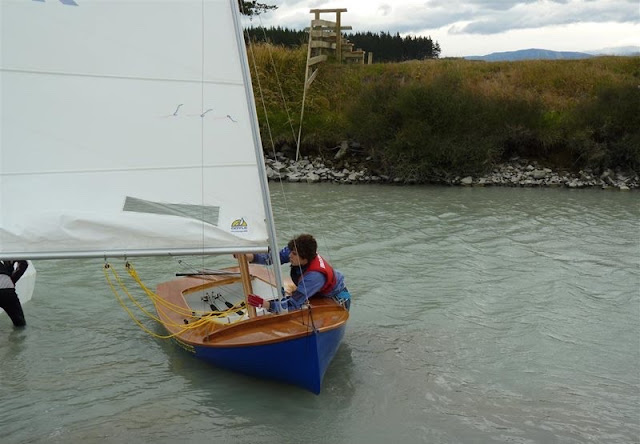 My mate Bernie rang me up. "A thing of beauty is a joy forever!" he thundered into the phone.

"A man has a bucket list and he must seize the day," he said.

" You have just purchased a Zephyr ! " I yelled down the phone.

I didn't ask him if the smile on his face was bigger than Texas. I could see it was even though he was on the other end of a telephone - that's the thing with Zephyrs, they make people smile a lot.

So now we are Four:

'Slipstream' and me - 'Racing Stripes' and Bernie.

So there are now two Zephyrs that will be racing on Tuesday evenings and Saturday afternoons ....... and Bernie has told me of another  Zephyr here in Whangarei that is not being sailed at the moment and is stored in an aircraft hanger somewhere. Bernie has seen the boat, "Beeeeautiful" he said .... "looks like a Steinway piano". Hmmmmm I feel in my bones that a critical mass is on the horizon; I certainly hope so...... well in fact I did prophesy in a wishful thinking kind of a way here:

I can see the appeal, sadly the design doesn't seem to have made it to uk, closest thing is probably the streaker or maybe phantom ( for those of us who have put on a few lbs)

The Streaker and the Phantom (from what I have seen in photographs) have similar proportions in terms of sail area and hull length etc to a Zephyr. They both look fast little yachts which like the Zephyr would provide good competition and day sailing for aging old salts whose old bones won't stand up to stacking out a-la Olympic Finn style.
All three yachts also have reasonable freeboard and a deepish cockpit so that you aren't sailing with your knees above the level of your thighs.

At 95 kgs I am on the heavier side for a Zephyr. The optimum weight is in the 75 - 85kg range - which I suspect would be a good weight for the the Streaker and the Phantom. Of course when it blows hard 95kgs is very useful!!

Your headline made me think about the relationship between the boat and the sailor. Lasers are interchangeable so the sailor and the boat aren't a unit. I see the Zephyr and her sailor could be a couple.
That is, Lasers are plastic copies of each other with no independent personality and her sailor would be as happy with number 12345678 as with 12345679, but the Zephyr looks like a boat to love.

Thank you Barubi for your comment. What you say is insightful - yes, some boats are interchangeable and don't have the same capacity for a skipper to individualize the boat. Many contemporary mass produced classes are of this ilk.

Luckily the Zephyr (Indigenous to New Zealand) although a strict one design does, because of its build history (triple diagonal, strip cedar, fiberglass) and the capacity to incorporate a varnished or painted deck/cockpit contrasting with a painted hull in a variety of colours lends itself to various ways of individualizing the boat to the skippers taste. I type this after a long race at Parua Bay Yacht Club this afternoon where yet again I am reminded what a beautiful little yacht the Zephyr is to sail - as you point out the Zephyr is certainly a boat to love!