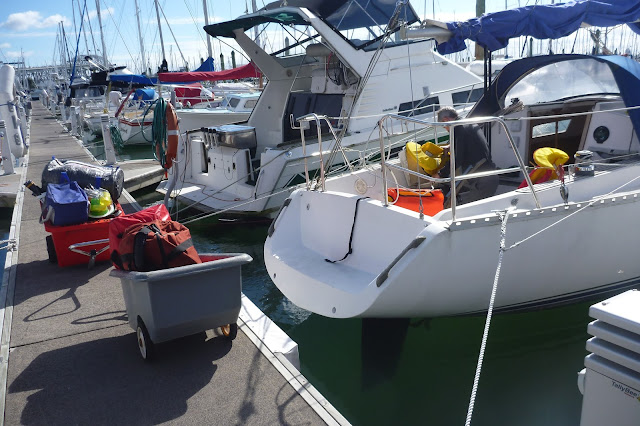 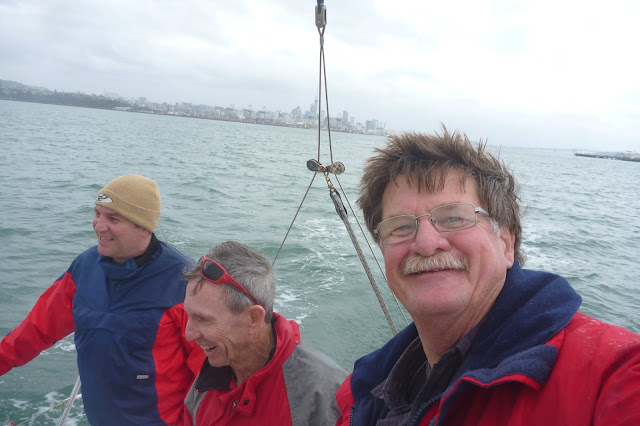 The three likely lads. From the left - Rama, David and moi. I forget what we were laughing about but the photo is a good symbol of a happy trip. 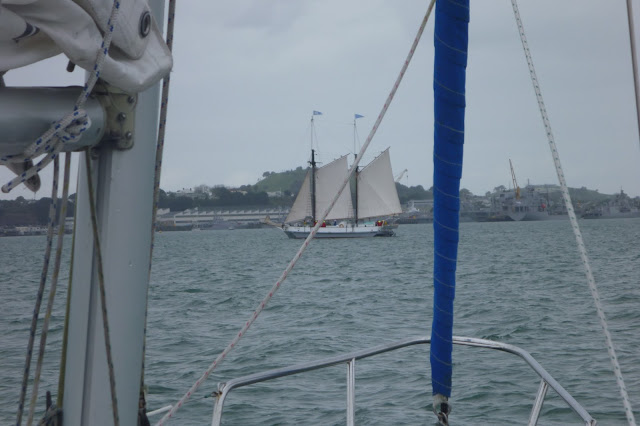 Even on a grey, rainy late Autumn day there is always something out and about on the Waitamata harbour. This is the Auckland Maritime Museums scow 'Ted Ashby' out on a jaunt. 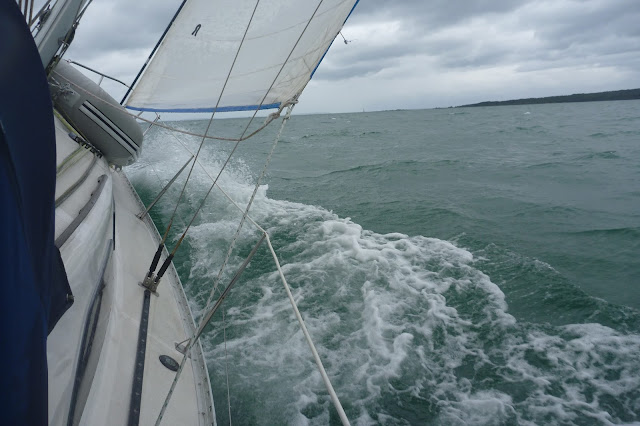 Hard on the wind heading towards Tiri Passage on the way to our first stop, Kawau Island. It was cold and rainy with poor visibility, the wind Westerly slowly turning during the day to NW at  25 knots. 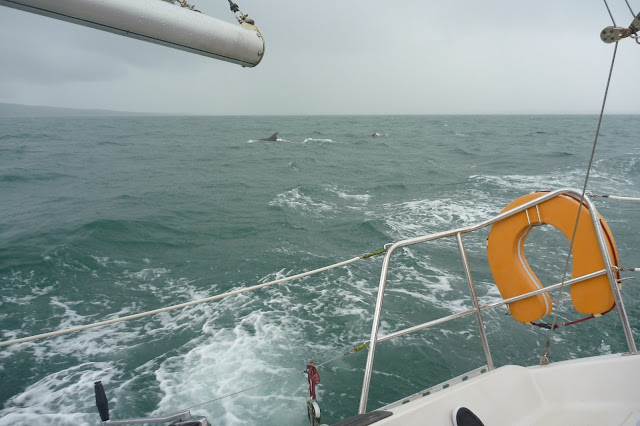 As we fiddled around trying to get the electronic speedo to work and commenting on the underwater impeller - sender unit etc the speedo suddenly came to life. Rama said something to the effect that ' A dolphin must have fixed it' - a curious thing to say I guess - but, right after the word "it" (I kid you not) a dolphin suddenly surfaced briefly right beside the boat. It was so close you could have reached out and touched it. I wasn't quick enough to get a photo of it, but I did get this photo of the pod of dolphins accompanying our speedometer fixer. I find these kinds of coincidences very intriguing. 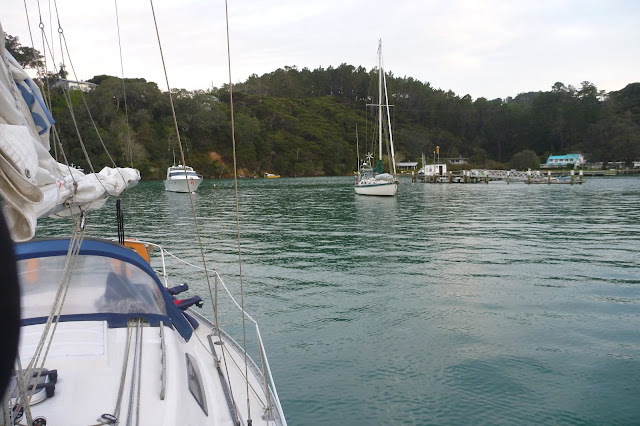 First stop, Bon Accord Harbour on Kawau Island. We had a restful night in this quiet little bay and started north the next morning. We were waiting for the predicted SW wind, a favourable wind that  would give us a fast trip north. We left not knowing exactly what the wind direction would be, as it was hard to tell in our sheltered anchorage. The forecast was for a Nor' westerly which might have meant we could lay up the coast, putting in a few tacks as we went. When we poked our noses out into the big blue sea we were met with a 35 knot Northerly right on the nose combined with a big left over swell from the NE. After bashing and banging around for about an hour I suggested to David that we go back to Kawau and wait overnight for the predicted SW winds, which we did.

The camaraderie that night included playing cards, drinking and talking bollocks; pretty familiar, traditional blokey fare - nothing excessive, but somehow, something that is at the heart of things. 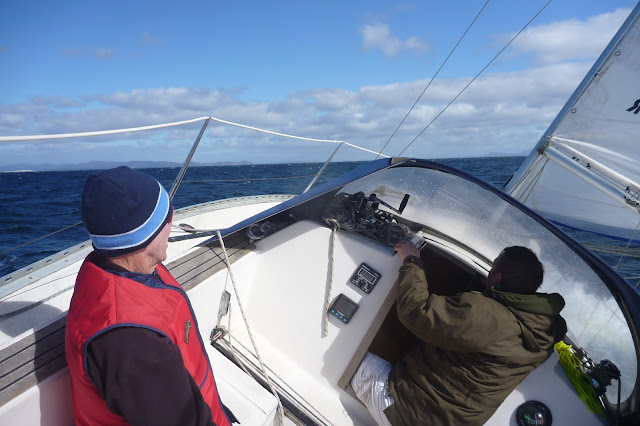 The next day we left for the north with the South Westerly filling in with a vengeance. The lesson to be learned is that it is always best to be prudent and wait out bad conditions if you can. In the old great days of sail, coastal sailing vessels could be seen en mass, at anchor, awaiting a fair wind. To do so is common sense and good seamanship.

The SW fair wind that we patiently waited for meant that we could sail most of the day with the sheets eased a bit and that we were able to sail the whole distance without tacking at all. 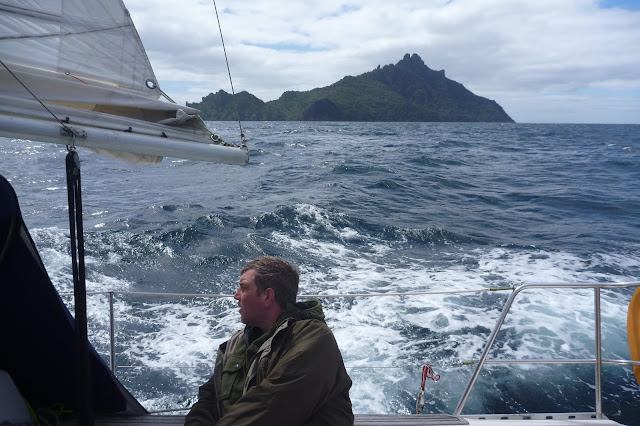 'Chez Nous' has a fractional rig with a large mains'l. As the wind increased we took in three reefs. This reduced the sail area by about 20 - 30% and moved the centre of effort forwards making her easier on the helm. Taranga Island slips past. This Island is also known as "The Hen" being the biggest Island in this group named 'The Hen and Chickens'. 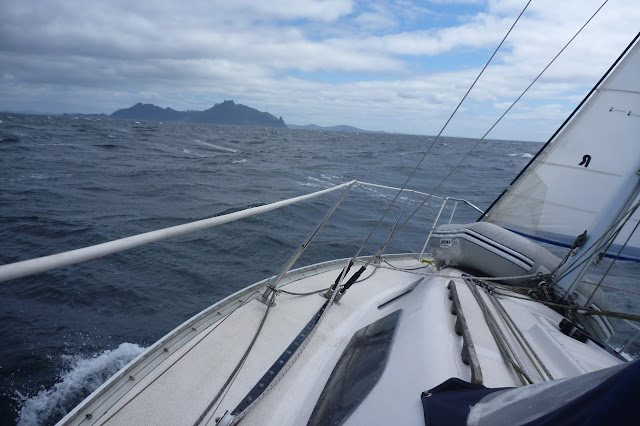 Bream Head, marking the entrance to Whangarei Harbour comes into view. Our destination Tutukaka on the horizon. 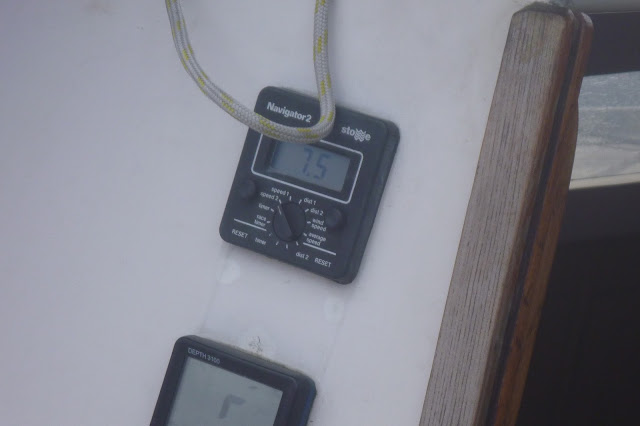 The speedo spent most of its time registering between 7 and 7. 5 knots for the duration of the trip. 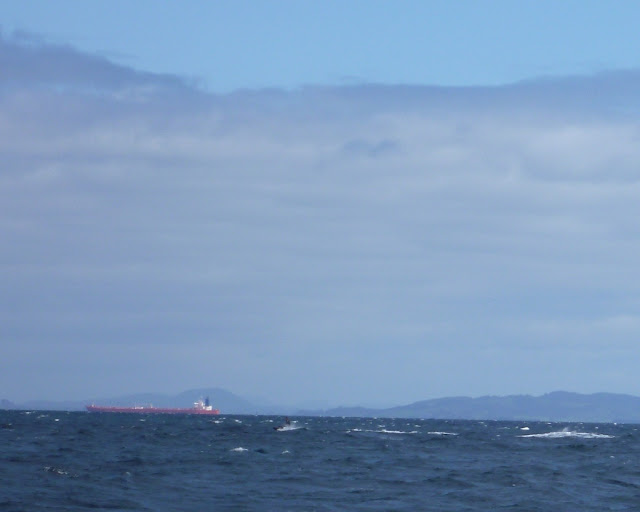 If you look carefully in the foreground of the above photo just behind the large tanker you will see one of two small jet skis that passed us going south at a great rate of knots. One of the great constants in life is that no matter where you go you will always run across mad bastards. That's not a condemnation of their behaviour, rather it's an accurate description of it. 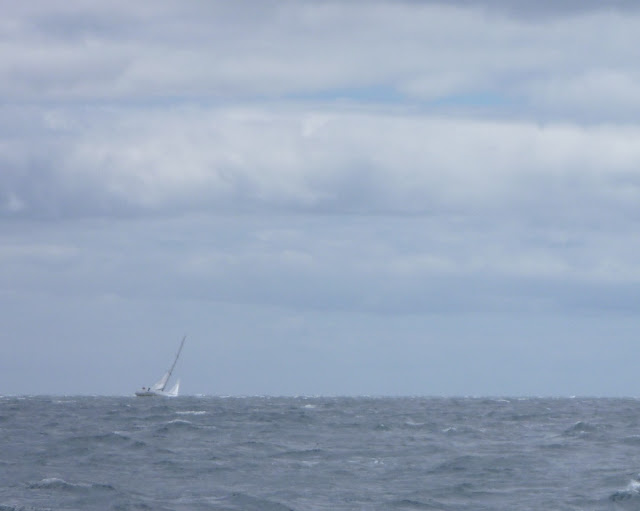 This was the only other yacht we saw. She's looked about 50 feet long and was tracking well with a reefed main and a small jib. 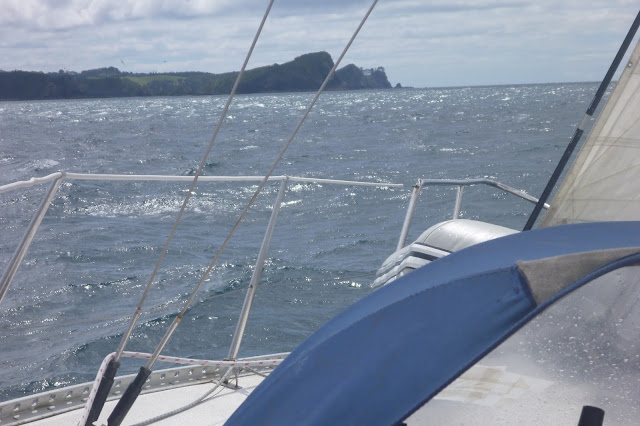 The familiar and distinctive ' Three Gables' of the Tutukawa headland. 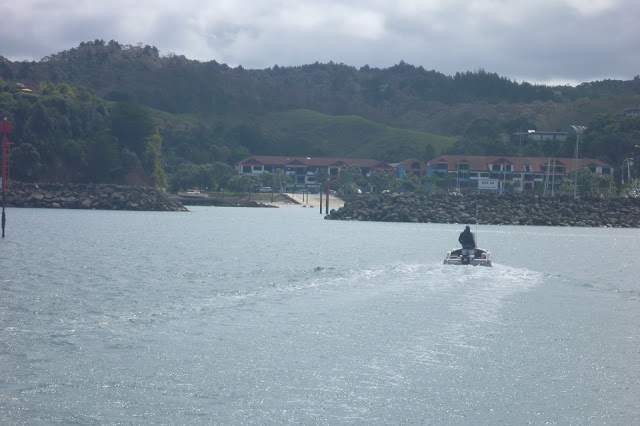 The entrance to the Tutukawa marina. David lives in the apartment complex in the background, so his new boat is nice and handy. 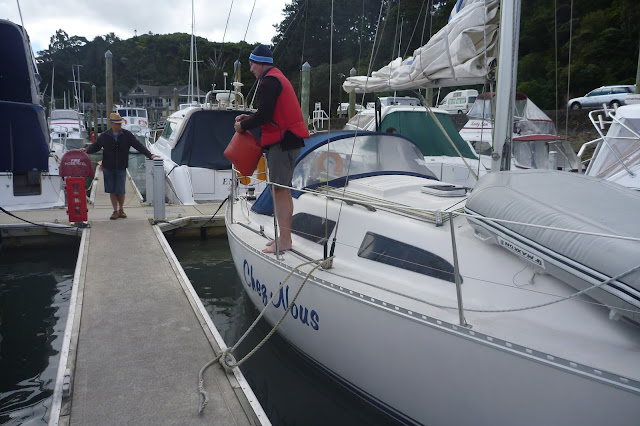 "Home is the sailor, home from the sea" - 'Chez Nous' safely delivered to her new place of residence - job done.

Yep, windy, with the wind finally blowing in the right direction for us.

Sounds like a great trip Alden! Paul Whitng certainly knew how to design a yacht, I believe he designed the Reactor while still at school!
A sad loss to the yachting community, it would have been interesting to see what the future held.
Incidentally I have a Whiting 16, currently tucked up under her cover in the garage.
Weather permitting I will be trailering up to Sandspit the weekend after next to take part in John Welsford's "Kawau Raid"....can't wait.

Paul, it was a great trip - as you will know these longish trips with a good wind and eased sheets are always very satisfying - blows out the cobwebs and inspires you to do it all over again - soon!

The loss of Paul Whiting was a tragedy and some say a travesty, in that a boat such as 'Smackwater Jack' should never have been given a Cat3 certificate. I certainly wouldn't go outside the Hauraki Gulf in a boat like that. But his legacy lives on in his other very worthwhile designs including the Reactor 25 that you mention a great little boat of which many are coming on the market at the moment and selling for ridiculously low prices.

I have heard of the John Welsford "Kawau Raid". If I had a suitable boat I might be tempted to go in it myself - maybe that's an adventure for another time for me. In the meantime best wishes and I hope you have good weather for the Raid, I am sure you will have great time.

Bring the Starling and a pup tent, you'll be right 😉

Would that be the John Welsford of 'Navigator' design fame?

I envy you guys going into your new season.. it was cold, and dark by 6.30 in the evening here yesterday (as I crawled around under Sparrow with cold pressure washer water blowing back in my face...)

Paul, I must say I am very tempted - but I would feel more relaxed in the current dinghy that I am renovating - more commodious and a lot drier.

Steve, yes, John Welsford designed 'Navigator' and a lot more besides. His design 'Scamp' is a very, very popular boat as well.

Our cunning plan to avoid our next NZ winter is to go to the UK to visit our daughter who is living there.

Chez Nous has gone to a new home. I am sure she will get looked after.
I have seen it on K Pier Westhaven for some time.
Looks like you had a great trip. Nothing like a 25 knot south westerly to sail out of Auckland in a hurry.

Hi Don, thanks for your comment. It was a great trip and you are correct about the wind. There is something fortuitous about the 'lay' of the coast from Auckland northwards - you can sail both ways with relative ease in anything from North West round to South West or an on shore Easterly. Southerly winds are great for going North only on - and Northerly winds good for going South only on. All round a blessed coastline with easy day sails and safe anchorages at nighttime.