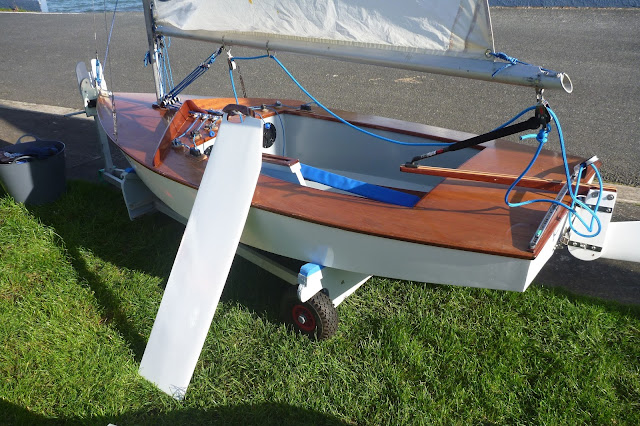 Late this afternoon I sailed in the first race of the Onerahi Yacht Clubs twilight racing series. I was keen to try out my centreboard with its new added area. There wasn't a very good turn out for the Starling class (only two boats) and the wind was light ( 2 - 6 knots). I was second in the first race and first in the second. The third race was called off for the lack of wind. Despite all this it was really good to be out on the water again.

It feels like the boat is pointing closer to the wind with the extra area added to the centreboard but I think I will need a few more races in varying wind and sea conditions to make a full assessment.


It was good to catch up with the other skippers and in the ensuring banter, where it was pointed out that I was almost twice the weight of the other Starling sailors, I was offered for purchase two Laser yachts that are for sale. I am finding it hard to resist the logic of such a purchase although the Laser is not high on my list of preferred boats. But it is pretty much the only adult sailing dinghy racing at the club in anything like relatively substantial numbers. It's a bit of a no brainer really if I want any sort of sailing competition on a level playing field. Hmmmmmm.

Excellent start.. any further thoughts on changing the dinghy??

Yes, Lasers are the way to go if you want to race a singlehanded dinghy. I agree that they're not the most attractive boat in the world. Not enough freeboard and no sheer line to be pretty. And uncomfortable! I always liked the Banshee more.

The RS Aero that Tillerman is crazy about sure looks attractive for its light weight. Maybe you could get a fleet going in NZ?

Steve, the only other change to the Starling would be to fit another venturi self bailer on the other side of the cockpit, this would half the exit time of cockpit water that comes aboard in rough weather. The only other change is a change of boat!! as indicated in the post.

Dan I have viewed a number of Utube videos of the RS Aero. It certainly looks like an exciting boat - light and very fast. I don't think at this point in time whether they are being built in NZ, so one would have to be imported - expensive.

Your assessment of the Laser is pretty accurate. Yesterday I watched all the Laser skippers sitting in their Laser cockpits with their knees much higher than their butts, they didn't look very comfortable - but then I guess sailing in general is not exactly tantamount to sitting in a Lazyboy chair!!

Alden, it seems strange you talking about the start of the season. Just as our Northern Hemisphere nights are drawing in and we're contemplating the last few days of sailing before the the really bad weather sets in for good.

Mark, the earth being tilted on its axis 23.5 degrees has a lot to answer for! LOL. But it is rather nice when we visit our daughter in the UK during our NZ winter and have a couple of back to back summers!

Alden - comes down to whether you sail your dinghy to race/be competitive, or for something else.. I'm guessing you lean towards the former so in that case, no matter how slighty less pretty they are (I can never bring myself to call a boat ugly.. :o) ), a Laser will at least give you a level playing field... ?

Steve I like to do both - the competitive racing and the 'Swallows and Amazons' stuff. I thought I was renovating the Starling to do the S & A stuff but the first thing I did was race it! I am currently renovating a more suitable S & A dinghy.

In terms of looks I have heard the Laser described as "a floating fridge door" which is perhaps a little unkind but it certainly is not a pretty thing. So I will go and take a look at a Laser that is being offered for sale (needs a repair job on the cockpit) and if its not too expensive possibly buy it.

What do you think about a Zephyr, not an Olympic class like the Laser, but definitely New Zealand design. Is there still any competition in it?

Ben, I am still at that murky, undecided, 'I don't really know stage'.

Any small racing yacht is physically demanding, some more than others.

The boat I prefer is an OK dinghy, but there is only one other racing at the club and they are very, very physically demanding with a large sail area - but they knock the socks off anything else with their strong Nordic good looks in my opinion. Most of the racing is in Auckland where there are big fleets.

My second preference is the NZ Zephyr which has less sail area, is a pretty boat and has a high boom which clears ones head relatively easily. There are strong fleets in most provincial cities skippered mainly by old buggers like myself --- except here in Whangarei.

My last preference is the Laser, which is not an ugly boat, rather it has been spoilt in my opinion by being designed with too little freeboard. This results not just in making the boat shallow and dish like; it makes sitting in it awkward, rather like sitting on a very low chair too close to the floor. Also from watching a lot of utube videos of Lasers they seem to have a propensity for completely submerging themselves if they nose dive at high speeds ...... but they are exciting to sail and a big fleet is available to race against at the local club.

So the choice is either:
- Buy a Laser and enjoy the racing and the camaraderie (not something to underestimate).

- Buy an OK dinghy, join the other solitary skipper, hope to start a trend and spend time trailering the boat around the country for the big fleet racing.

- Buy a Zephyr, hope to start a trend and spend time trailering the boat around the country for the big fleet racing.

- Buy a pair of powerful binoculars, equip myself with a thermos of tea (and sandwiches) and watch the racing from the shoreline LOL.

- Buy a pair of powerful binoculars, equip myself with a thermos of tea (and sandwiches) and watch the racing from the shoreline LOL.

That made me laugh out loud. Don't forget the cookies to go with the hot tea!

Dan, "Many a true word is spoken in jest" as Shakespeare has written!